It may have been his ghoulish sense of humour, or then again it maybe just that it was just his favourite song, but when horror author James Herbert's coffin was carried into the church for his funeral, Here Comes the Sun by The Beatles was playing. John Lennon's, Working Class Hero would have been just as  appropriate because that's very much what Mr Herbert was. No matter how big the  riches that came his way, he remained to the end that same old East End boy.

The author had died at the relatively young age of 69, but he'd packed a lot into his years. From humble beginnings in London's East End with the Kray Twins counting amongst his neighbours, he came a long way. He had sold over 54 million books worldwide by the time the of his death, was awarded an OBE in 2010 and he left an estate totalling more than £8 million. His first book, The Rats published in 1974 sold out its first 100,000 copies in three weeks. Even now, several years after his death, his works remain in print and are strong sellers.
Herbert was one of the few British novelists to become a multi-millionaire from writing almost exclusively in the horror genre. Stephen King is the only horror writer who has exceeded Herbert’s total sales, but whereas King has received respect from the literary establishment, Herbert never did. King once described Herbert's first novel, The Rats as being like the Sex Pistols, Anarchy in the UK - And maybe King is right, maybe Herbert was too punk for the mainstream. He was adored by the reading public though, and that was enough for Herbert who was as unpretentious a man as one could meet.

“If The Rats, with its scenes of gruesome horror and its blasted East End landscape, is not a literary version of ‘Anarchy in the UK,’ what is?” Stephen King

I used to write to the author whenever he had a new book out, and I always got a letter back - you can't say the same about all of the authors  I've written to over the years. I never met Herbert personally but I did in the pre-Internet days correspond with him a few times a year. This started when I was a book obsessed teenager and it made me feel closer to the author's books. It also felt great to get a letter from such a literary superstar.

I guess Herbert would have known how I felt since as a boy, he was inspired by the American comic book Casey Ruggles, which he found on the market stalls in Petticoat Lane.

"That's where I learned to write. For a cowboy comic, it was incredible. The only time I wrote a fan letter in my life was to [its writer and artist] Warren Tufts and that was when I was 30. I rang up Hanna-Barbera because somebody told me he was working there as an animator and got his address, wrote a letter and got a cautious reply back."  James Herbert.

That first letter  led to Herbert and Tufts becoming penpals.

“Enough to make a rodent retch, undeniably, and enough to make any human pitch the book aside.” Martin Amis reviewing The RatsAnd so to cast aside pretension here, in true tabloid style, are some facts you may now know about James Herbert.

1. Herbert was afraid of the dark as a child, but his only fear in later life was of spiders.

2. He named his youngest daughter Casey, after his comic-book hero "Casey Ruggles", an 1850s Californian cowboy.

3. While never losing his own East End accent, he once commented that his brother John became a “very, very middle-class” broker for Lloyds.

4. In 2010, he was made Grand Master of Horror by the World Horror Convention. He was presented the award by his friend Stephen King.

5. His favourite party trick was to challenge guests at his Sussex home to sit in two chairs that once belonged to satanist Aleister Crowley.6. He would finish writing at 6 o’clock each evening in time to pour a large vodka and watch The Simpsons.7. Fearing that the Krays may read his books in prison, Herbert’s mother once told him off for branding the brothers animals in his fiction. They were childhood neighbours.8. He grew up around the corner from Petticoat Lane in Whitechapel, once a haunt of Jack the Ripper.9. He "hit the roof" when his publishers printed his fourth novel Fluke in Times Roman typeface and ordered that it be reprinted in Palantin.10. His mother arrived in London from Manchester aged 21. The first person she would meet after getting off the tube was his future father.11. His first novel, Rats, published in 1974, features mutant man-eating rats take over London. It was inspired by the hordes of rats that would attack his parents’ supplies of fruit and vegetables. 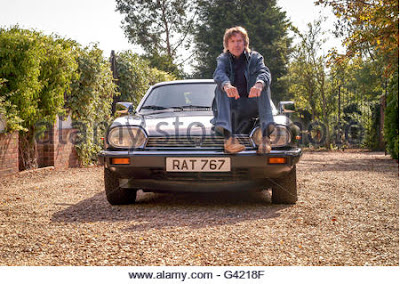 12. Although the manuscript was rejected by five out of the six publishers that Herbert sent it to, the first 100 000 copies of Rats sold out within three weeks.13. In the guise of “Henry Tilney”, Martin Amis was the first critic to review Rats (for the Observer). He was not impressed.14. He wrote 23 novels which have been published in 34 languages including Russian and Chinese. He has sold over 54m copies worldwide.15. After school and art college he worked as an art director at an advertising agency alongside Salman Rushdie.16. He designed many of his own book covers.17. He abhorred violence and didn’t plan to write horror but he explained that it just poured out of him.18. In a famous scene in his second novel, The Fog, the entire population of Bournemouth walks into the sea.19. Five of Herbert’s novels have been adapted for the cinema, television and radio.
at September 01, 2021