The John Wayne movie that never was 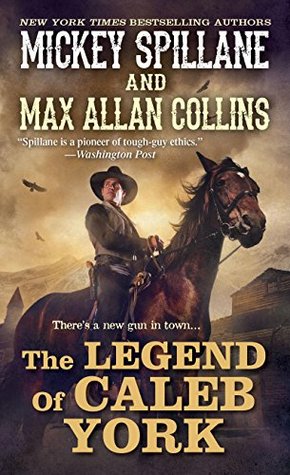 Billed as being by Mickey Spillane and Max Allan Collins, this is actually a novelisation by Collins of an unproduced script that Spillane wrote around 1959 for John Wayne.

The original screenplay was titled the Saga of Celeb York and during the time of writing Spillane and Wayne were good friends - in the introduction to the book Collins points out that the reason the script was never filmed was largely down to the fact that Wayne's company, Batjac lost a lot of money on the movie, The Alamo.

Wayne of course directed, produced and starred in the Alamo and although the movie took a sizeable slice of the box office it failed to make money given it's huge production costs.

Had the Alamo made money then Wayne' next project would likely have been Spillane's screenplay, but instead Wayne opted for a string of safe though successful westerns, such as North to Alaska.

Reading the expertly written novel one can't help thinking that this was a missed opportunity - the books reads in a very visual style, perhaps because the source material was of course a screenplay. And most of the beats that take us from plot point to plot point are set out in a very filmic fashion. It's very easy to visualise the scenes in the reader's mind, which speaks volumes of Collins skill at penning a narrative. 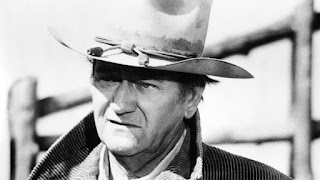 In an untamed desert ruled by outlaws, Trinidad, New Mexico, appears to be an oasis of civilization. Sheriff Harry Gauge rules his town with an iron fist, a fast gun—and an unbridled thirst for power.Rancher George Cullen would rather take a bullet than give in to the greedy sheriff's land grab. But a cattle empire isn't all Gauge wants—he also has his eye on Cullen's beautiful daughter, Willa. So Cullen gets word out that he's hiring the fastest gunslinger money can buy. When a stranger rides in, townsfolk wonder if this is the rancher's hired gun. Whoever he is, the stranger won't be pushed . . . and his aim is deadly.

It's a very good book and totally engrossed the reader throughout - I especially liked the way that the character of York was introduced and I felt it was a nice touch that the air of mystery was retained for most of the book. Is the gunman really Caleb York or some other shootist? Reports are  that York was shot down some time back by Wes Banion.

There's nothing truly original about the plot - it's your standard oater material but it's put together with skill and is truly an entertaining traditional style western.

This review is a lovely surprise. As you may know, I have written five more Caleb York novels, following Mickey's lead, staying with his characters, setting and (I hope) tone. I will post a link to this on my weekly update/blog, which goes up (or as they insist on saying now "drops") Tuesday mornings.

I've got the second Caleb York and will be reading it soon - I'll look out for the others.