Here Dave Lewis gives us the third part of his look at the Duke's early years. 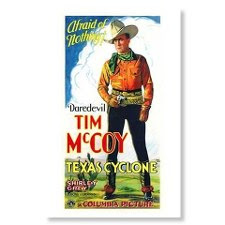 Texas Cyclone (1932) was hardly John Wayne’s finest hour. But at least he didn’t have to play a corpse as in The Deceiver, or spend much of the movie in jail as in The Range Feud (both 1931). In the months since The Range Feud he’d had another small part in a football drama, appeared in two short subjects and starred as a carnival stunt pilot in the 12-chapter serial The Shadow of the Eagle. Now here he was back in a minor role in a B-Western, backing up Col. Tim McCoy. After snagging second billing behind Buck Jones in The Range Feud, he’s knocked down to fourth, and instead of playing the hero’s stepbrother, he’s merely one of several pals from Texas

As the posters proclaim, Texas Cyclone belonged solely to McCoy. On the 1-sheet McCoy’s face is as big as King Kong’s, and on the 3-sheet he towers over the landscape like Paul Bunyan. John Wayne is just a name in the fine print. Wayne finally got his revenge in a foreign DVD release, where he’s the star.

As the story opens, McCoy wanders into a town where everyone seems to know him, mistaking him for a man five-years dead. Even the dead guy’s wife is fooled. The widow, of course, is losing her cattle to rustlers, so Tim calls in Wayne and his other Texas pards to help. Violence ensues, and there’s a big twist at the end to make everyone warm inside. Walter Brennan is on hand as the sheriff. Wayne reportedly didn’t like Tim McCoy, but I like him just fine. He always has a twinkle in his eye, and the way he shoots a pistol--by pointing the gun barrel straight up, then snapping his wrist forward as he fires--just has to make the bullets go faster.
Posted by Gary Dobbs/Jack Martin at 12:48