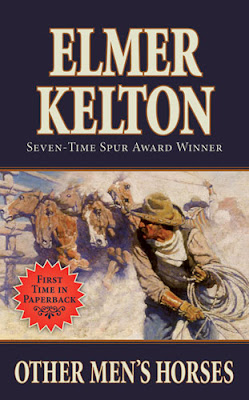 Before he became ill and died last year, Elmer Kelton completed the final two books in his nine-novel Texas Rangers series.
The first of the two, “Other Men’s Horses,” came out in hardcover last fall and is now available in paperback.
The second, “Texas Standoff” (Forge, $24.99 hardcover) goes on sale Tuesday. This is the last novel by the beloved San Angelo western author, voted the greatest of them all by his fellow western writers.
The series, which focuses on two principal Texas Ranger figures in the period during and after the Civil War — Rusty Shannon and Andy Pickard — kicked off in 1999 with “The Buckskin Line.” That was followed by “Badger Boy” and “The Way of the Coyote.” Those three were then republished together as “Lone Star Rising.”
Then came “Ranger’s Trail,” “Texas Vendetta,” and “Jericho’s Road,” which were then collected into “Ranger’s Law.”
Kelton told me a couple of years before his death that his goal was to complete the Ranger series after the ninth novel. That would give the publisher an opportunity to bring out one more three-novel collection. I don’t know if Forge plans to do that, but I can’t imagine that it wouldn’t. So in another year or so, I expect to see “Hard Trail to Follow” and these last two stories reissued in that format.
In “Texas Standoff,” Texas Ranger Andy Pickard is having second thoughts about continuing his career with the Rangers, especially after he is paired with a new partner that is known to be hot-tempered and generally unpleasant.
Pickard has married and looks forward to settling down on his own ranch when he can save enough money to afford to quit the force. More and more it is harder for him to leave his young wife, Bethel, as he goes off to track down bad guys.
But duty calls, and he and his new partner, Logan Daggett, are sent to Central Texas to try to stop a two-family feud before it becomes any worse. The Teals and the McIntoshes have a long-standing dislike that goes back to their Civil War loyalties. While the younger family members might be inclined to put aside their prejudices, the two family patriarchs carry deep hatred for each other.
Each family suspects the other of stealing their cattle, but neither side can prove anything. Meanwhile, Pickard and Daggett find there might be another side to the story involving a group of masked vigilantes known as the regulators.
As violence escalates, the two Rangers find themselves caught in the middle of a situation they had hoped to prevent.
Once again, Kelton weaves an action-packed story that is true to the history of the period.
Posted by Gary Dobbs/Jack Martin at 03:31