CBC, Canada's news service recently interviewed  KOBO's cheif executive Michael Serbinis regarding the rise of eBooks - below we are able to repost the interview in full: Check out CBC for all the  news HERE


CBC News: Early this year, you predicted e-readers would get down to $100 by the end of the year. With the Kobo now $129 US in the U.S., we're almost there. Is it happening faster than you thought?
Michael Serbinis: It's on schedule. There are already e-readers that are kissing the $99 point or already there. We're getting there.
CBC News: Many have predicted that multi-use devices such as the iPad will make single-use e-ink readers obsolete. That's not the case when the price gets that low, right?
Serbinis: Right, and when you're focused on reading, having CNBC ping at me or having some other notification happen in the background doesn't exactly make for a relaxing environment. There are a lot of customers who prefer to have a dedicated reading experience, not only for price point but because it's dedicated and they can relax and escape by getting into a good read.
CBC News: Is it also similar to a video game console, where the manufacturer can afford to take a loss on the hardware because it's the software that makes the money?
Serbinis: Yeah, and if you look at what's happened in this space this year, in January at the Consumer Electronics Show there were a ton of guys in the e-reader or e-book category. Where are they now? A lot of them that didn't have a comprehensive solution of content, apps and their own device, they're not in business. So there is that possibility where if you have both, you can subsidize, but I don't think anyone is really doing it to any significant degree.
CBC News: E-book sales are ramping up, but where do you see them going?
Serbinis: When we started this as a pilot project at Indigo, we talked about numbers like two to three per cent [market share of all books] in five years. I think everyone is astonished at where we're at today, let alone five years from now. At the end of the first quarter this year, some of the top-tier publishers talked about being around nine per cent, so what does that mean at the end of the fourth quarter? Fifteen, 13, 12, who knows? It's happening faster than anyone expected.
CBC News: What do you attribute the fast growth to?
Serbinis: Number 1 is the availability of great content. E-books have been around for a long time, for 10 years, but 10 years ago you couldn't get John Grisham or bestsellers. You could get some romance and some science fiction, but that was about it. Today you can get a ton of great content, and also today you have this range of different devices that are connected. You have these great screens that are like paper. Those contribute to the fact that consumers are ready to consume books in digital form. A lot of consumers, certainly in [the under] 45 category, have been asking the question, 'Well why can't I get my books this way? I can get all my music this way.' The consumer is ready.
CBC News: How much is the competition between device makers and e-book stores playing a part?
Serbinis: It's different than the early days of digital music. The first iPod from an electronics standpoint wasn't radically different but it was easy to use, and the iTunes software and store rounded out the experience. The very first e-reader guys, like digital music guys, just cranked out devices. What has happened is that many guys who were just doing one piece of the puzzle have gone away. It's very competitive and there are already winners and losers, and we're definitely gaining on everyone fast. We only became Kobo eight months ago and 120 days ago we launched the Kobo reader. We're coming out of the gates screaming and we started this price war. Everyone was at $350 and $299 and $249 and we came out $100 less. Subsequently prices have come down and new devices have come out and we have to do the same to stay in the game. It's very competitive and we're the only pure play, the only start-up. We're David among a few Goliaths, but we're confident about our prospects.
CBC News: Most of the e-book stores are offering would-be authors the ability to easily self-publish their own books. How much will this change the book business?
Serbinis: If you look at the economics, there's all kinds of blogs about this, analyzing just how much a freshman author can make based on their take on physical print run. If you compare that to digital, there are many scenarios where it just looks better to self-publish and go digital. However, you still have to market your book and that is the biggest dollar sign in terms of costs out of your pocket and it's also the biggest question mark — can you do a better job than the publisher? If the publisher spends no time or energy and doesn't view you as a priority, you're probably going to do a better job. On the flip side, if they do have some interest in you and are going to put some energy behind you, then odds are you're not a better marketer based on their scale, experience and infrastructure. That's the big question. The digital tools we have today make it easier to turn out a digital book but at the end of the day, how do you market it and sell it?
Will we see more people self-publish? Absolutely. Will we see publishers go to digital first instead of print first? Absolutely. There's nothing more disappointing than spending a million bucks on an author, then having 50 per cent of the books returned from retailers because they didn't sell. Is it better to put out a digital run first to test it and see if it gets any pickup, then do a print run? Yeah, for some authors it does. 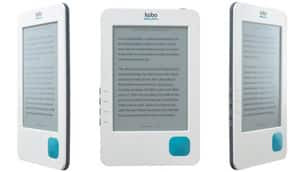 Kobo started a price war in e-readers, CEO Michael Serbinis says. (Courtesy Kobo)CBC News: There have been some anecdotes about people doing that on Amazon — that they self-publish a book and it ends up selling, then they get picked up by a publisher. Do you see that sort of thing increasing?
Serbinis: Absolutely. There are other macro factors like the entire value chain in publishing. I have to believe that based on digital growing and margins [on them] being smaller than physical books there's going to be less money cascading down through the system. So how does that work? Does it mean there are less publishers, do you take more costs out of the publishing system, is there more costs out of the retail system, does the author get less? It's got to come from somewhere. I've got to believe that everyone is looking for ways to leverage digital tools and technology to take costs out of the system, otherwise there just won't be as many people in the system.
CBC News: Going back to what you said about priority and non-priority authors — if publishers have low-priority authors and don't market them, those writers don't seem to have any reason to stay. Won't they just leave and self-publish?
Serbinis: Or they'll go somewhere else. Don't assume that there won't be a set of purely digital publishers. Today we have a group of companies that we call self-publishing houses and they make money on helping [authors self-publish], but what if there were publishers that were 100-per-cent digital? Open Road is sort of an example, but what if there were a 'United Artists of Digital Publishing?' I think you have a whole different model around authors who want to go straight to digital and then print as an afterthought. I can't help think that the whole publishing structure is going to change in some ways that are predictable, and some ways that aren't. Will there be as many publishers? Probably not as many big ones as we have today.
CBC News: In music, it's pretty clear the record labels were caught unawares by the digital revolution. It seems like the e-book revolution is happening faster than music, so how ready are publishers?
Serbinis: Good question. When we cut our first publishing deal with a top publisher, it tooks six months, and it was pretty painful. But I'm sure the six months of pain we experienced is nowhere near what the first music deal took. Deals today tend to take six days — there's exceptions to that, but they're happening way faster. My own read is that among book publishers today, there are a lot of bright lights that saw what happened to music. A lot of book publishers are owned by media conglomerates that have music labels, TV studios, radio stations. What happens anecdotally at the end of every quarter is that the CEO of the book-publishing arm, the CEO of the music arm, they all get together. The book CEO had years of experience watching his music guy get punched in the stomach every quarter and thought, 'I don't want to be that guy. What mistakes did they make?'
CBC News: Going back to Kobo, you mentioned price is important for competing devices. What about the e-books themselves — how do you plan to compete with the likes of Amazon or Apple?
Serbinis: Number 1, we have to provide choice. Clearly Amazon wants to provide great selection and great pricing. Pricing as a factor is being neutralized by the publishers. Amazon can try to have the biggest library in the world that's closed, so you buy from them [and] you can only ever keep your book with them. Apple doesn't have anywhere near Amazon's selection or our selection, [it's] far less of a focus for them. But they have an app and no doubt they'll continue to use it to highlight the capabilities of the iPad. A key area for us is being open and providing the most choice. We also enable you to go to libraries. We were stunned by just how many people bought a Kobo reader so that they could use books from the Toronto Public Library or the Michigan Public Library. If you want to take your books with you and go to Sony or the next company, you can have them independent of whether we're around. That's a key element.
That's where we are today, but the question is: what makes us differentiated tomorrow? A lot of what we're doing with Samsung and being the e-book store on really the only contender to the iPad that I know [the Galaxy Tab] … there will be more of those announcements as we get closer to the holiday season of tier-one brands being pre-loaded with Kobo. We want to provide you with the most choice on the most number of devices. Making the experience more fun and engaging is [also] a key focus for us in the next little while.

Posted by Gary Dobbs/Jack Martin at 05:00