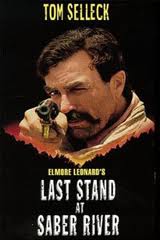 I really enjoyed this 1997 TV movie which was based on the novel by Elmore Leonard - the movie is also notable for featuring a wealth of western icons in supporting roles - both David and Keith Carradine and Harry Carey Jnr.

Selleck plays Cable, fresh home from the war he is horrified after driving his family to Arizona, he finds that squatters have taken over his ranch. He, together with his fiesty wife kick the men off, killing two of them in the process and sparking off the fued with the Kidston brothers.

It's an exciting movie, excellently done and Selleck is superb as the iron willed Paul Cable.The actor was rewarded with a Western Heritage Award for his work on this movie.

In fact it's top knotch performances all around, especially for Keith Carradine. Suzy Amis is also excellent as Cable's wife, a woman just as deadly with a scatter gun as her husband is with his six shooters. The final shoot out is truly thrilling and there's no sickly sweet ending.

Another excellent Selleck western
Posted by Gary Dobbs/Jack Martin at 14:22