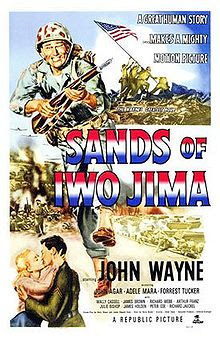 John Wayne will always be seen as the definitive screen cowboy but he often worked in other genres, crime, comedy, drama and war movies. Many of his non-western excursions were forgettable but there were a fair few classic there - The Quiet Man for one. However  outside of the western, it is perhaps for war movies that Wayne is best remembered.

Here are just a few of my favourites:


1- Green Berets - I know this movie is often criticised for it's "gung ho" attitude and flag waving but as a movie it doesn't go far wrong. Wayne play his usual heroic character and David Janssen is the doubter who soon raises his weapons in the defence of liberty. Ignore the doubters and sit back and enjoy this movie for the screen entertainment that it is.

2-The Flying Tigers - Made in 1942 this movie was very much intended to boost morale during the mid-point of the war. Cowards redeem themselves and good ultimately triumphs over evil thanks to some steely eyed heroics from the Duke. It can all be very simplistic but as an action adventure it is excellent.

3- The Longest Day - Whilst Wayne is only a small part in the massive cast that makes up this drama about D-Day it deserves to be included here - not only is it a great war movie but Wayne plays his cameo role wonderfully. The advertising posters boasted of 48 international stars in the cast and the movie took two Oscars in 1962.


4- Operation Pacific - Set in the Philippines this looks at the operations of the American submarine crews. The Duke plays Lt. Duke E. Gifford in this tense drama that really should be better remembered than it is. 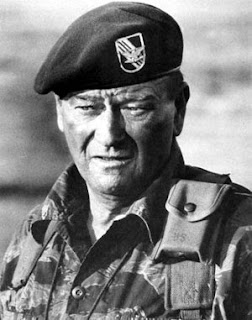 5-In Harms Way - The Duke, Kirk Douglas and Henry Fonda. What a cast! And that's not to mention Burgess Meredith, George Kennedy and Slim Pickens. This is another tension filled movie about the attack on Pearl Harbour. It's an 160 minute epic and well worth watching.

6 -Sands of Iwo Jima - Wayne is tough as nails, Sergeant Stryker. He is disliked by most of his men for his brutal training regime and his equally tough manner. However in the heat of battle the men soon realise that a man like Stryker is essential if they are to win the war. The movie depicts the iconic flag raising on Mount Suribachi. The flag used in the movie is the actual flag the marines used and was loaned to be movie by the US Marines Museum
Posted by Gary Dobbs/Jack Martin at 02:27