Author James Reasoner is responsible for more books than the Duke made movies - here he tells us of his admiration for one of Wayne's lesser westerns, The Comancheros.

Find James' own corner of the Wild West Web  HERE 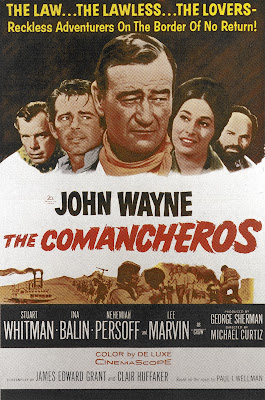 My favorite John Wayne movie – notice that I didn’t say it’s the best John Wayne movie, because I don’t think it is – is one that doesn’t show up on many people’s lists.  It was released in 1961 and was based on a novel by Paul I. Wellman.  The script was by the always-dependable Clair Huffaker (author of many fine Western novels and film scripts), and it was the last film directed by the legendary Michael Curtiz, director of CASABLANCA, THE ADVENTURES OF ROBIN HOOD, WHITE CHRISTMAS, and many other classic films.
I’m talking, of course, about THE COMANCHEROS.
For those of you who haven’t seen it (I can’t imagine there are very many of you), the story centers around Paul Regret (Stuart Whitman), a Louisiana gambler who flees to Texas after killing a powerful politician’s son in a duel.  As soon as he arrives in Texas, though, he’s arrested by Texas Ranger Jake Cutter (John Wayne).  At this point in time, Texas is still a republic, but there’s talk of joining the Union, so the authorities in Texas try to cooperate with the authorities in the States.  Cutter plans to have Regret extradited back to Louisiana.
Of course things don’t work out that way.  Regret winds up becoming a Texas Ranger, and he and Cutter go undercover to break up a gang of gunrunners who are selling rifles to the Indians, the gunrunners being the Comancheros of the title.  There’s a pretty girl, of course (Ina Balin), who’s the daughter of the patriarchal leader of the Comancheros (Nehemiah Persoff).  There are plenty of fistfights, gunfights, and chase scenes along the way before everything wraps up with an epic battle between the Rangers and the Comancheros.  Pretty standard stuff.  So why is THE COMANCHEROS my favorite John Wayne film?
To start with, it has a great cast.  In addition to the actors I’ve already mentioned, there are fine performances from Bob Steele as a settler named Schofield, Bruce Cabot as the commander of the Rangers, Edgar Buchanan as a judge, George Lewis as the Comanche war chief Iron Shirt, Michael Ansara as an arrogant gunman, Guinn “Big Boy” Williams as a smuggler named Ed McBain (!), and probably best of all, Lee Marvin as the half-scalped gunslinger Tully Crow.  Patrick Wayne plays a young Ranger named Tobe, who, along with his dad and Stuart Whitman is part of a brief but iconic shot during the Comanche attack on the Schofield ranch.
Then there’s Clair Huffaker’s script, which is full of good lines, like this one from Buchanan’s judge character:  “There’s no way to do this legal and proper, so, bein’ good Texans, we’ll just do ’er illegal and improper.”  (I’m probably paraphrasing slightly, but that’s close.)  At one point, Wayne’s character mentions someone “taking off for the tall and uncut”.  I’ve used that line in countless Westerns in my career.  Another favorite is this exchange between Whitman and Wayne:  “How do you know you killed him?” “Wasn’t time not to.”
The music is another great strength of this movie.  The stirring theme song has stayed with me all these years, and it always brings a big grin to my face whenever I hear it.  And I can hear it whenever I want to, because I have the soundtrack on CD and also on both of my computers.  It’s playing as I type these words.  Many times, when I’ve been writing a big battle scene at the end of a book, I can hear the theme from THE COMANCHEROS in the back of my head whether it’s really playing or not. 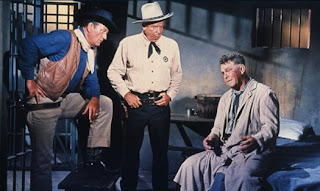 So why do some people actively dislike this movie?  I’ll admit, it’s pretty inaccurate historically.  Texas is still a republic, so the time period has to be before 1845, and yet everybody dresses like it’s 1880.  Worse still, they’re carrying Peacemakers and Winchesters, neither of which would be invented for quite a while yet.  I understand why things like that bother a lot of viewers.  When I see anachronisms and other historical mistakes in other movies, it bothers me, too.   But I’m willing to give THE COMANCHEROS a pass on that score because I love the movie so much.  And now I’ll tell you the real reason why I love it that much.
Because my dad took me to see it at the Eagle Drive-in Theater when I was eight years old.  That’s good enough for me.
Posted by Gary Dobbs/Jack Martin at 17:52

I love this move even if they do ride out of Galveston into the mountains. The novel by Paul Wellman was probably the first grown-up western I ever read when I was a kid, so I have a lot of affection for that, too.

It sounds so unAmerican for me to say I've not watched many of John Wayne's movies.

I always liked this one too. I need to get a copy, it's been a long time since I have watched it.

Thanks, James. Nicely done. I'd be interested in how historically accurate is the portrayal of the comancheros themselves. The only other comanchero I can think of is Blue Duck, who shows up in LONESOME DOVE.

James, many of my favorite movies are that way specifically because I saw them with my Dad, too.

One of my favorite Wayne pictures as well, having seen it as a kid. And a great soundtrack that stayed with me over the years. Nice to know others appreciate it as well.