From the Ringo Kid to Rooster Cogburn, from Sean Thornton to McQ, John Wayne never failed to dominate the big screen, broad at the shoulder and narrow at the hip he had no trouble filling even a cinemascope screen – an actor big enough to occupy John Ford’s beloved Monument Valley.
Wayne was born in 1907 in the small town of Winterset, Iowa. Christened Marion Robert Morrison (not Marion Michael Morrison as many believe.) he acquired the nickname of Duke after his dog that followed the young boy everywhere. Wayne’s childhood home – 216 South Second Street- is open seven days a week to the public and each year thousands of fans from all around the world visit this shrine to a truly great American.
Wayne’s politics often found him at odds with the counter culture and his involvement with the House of Un-American Activities Committee may have been deplorable, but it is dangerous to judge times past by modern standards. The one thing about Wayne that cannot be disputed is that he was first and foremost a patriot. And there ain’t nothing wrong with being patriotic, despite what the namby-pamby liberals may say. Many critics of Wayne’s tough guy image have slammed the actor because he failed to enlist in the forces during World War II, but Michael Munn’s book, John Wayne: The Man Behind the Myth put the record straight on that fact and revealed previously hidden files relating to a communist plot to assassinate the actor. We will be looking at these bizarre events during the weekend. 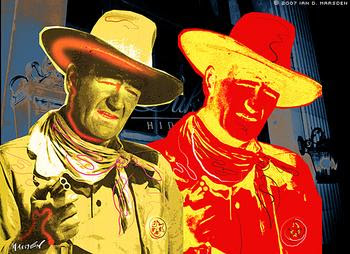 There’ll be reviews of many of the films, a look at Wayne on television, a feature on the good work being carried out by the John Wayne Cancer Institute and also what are, in my opinion, the top ten Wayne movies of all time. Now I’m damn sure not everyone will agree with my choice of films, but that’s fine because Wayne’s canon is so varied that there are bound to be differences of opinion. Add to this everything else that is happening on the Tainted Archive and it becomes clear that this is a tribute as big as the man himself.
Saddle up, Pilgrim – the John Wayne tribute weekend is go.
Posted by Gary Dobbs/Jack Martin at 01:29