'I ran over to the students and I was just so angry and I said, "You stupid bastards! You stupid fucking arseholes! Blame Johnson if you like. Blame Kennedy. Blame Eisenhower or Trueman or fucking Roosevelt. But don't you blame that kid. Don't you dare blame any of those kids. They served. Jesus that kid lost an arm. I mean what the hell is happening to this country?"'

John Wayne talking about the time he accosted a couple of Vietnam protesters who had been jeering at a young Marine who had lost his arm in battle.


Wayne was furious with the opposition to a war that he saw as necessary, and he felt he had to make a film that showed why America had to be in Vietnam - not a popular view but then Wayne, like all great men, would never waver from his own convictions. The actor visited Vietnam in 1965 and did a tour to boost the morale of the troops. One day the Duke came up against a bullet that had his name on it.

'I almost walked into a sniper's bullet that had my name on it. I heard the wind of the bullet whistle past my ear and I dove for cover, realising I had had a narrow escape.' John Wayne talking to Michael Munn in 1974.

When Wayne returned from Vietnam he was more than ever eager to make his Vietnam movie. He was filming The War Wagon at the time and as soon as the western wrapped he threw all his energies into The Green Berets - a pro-Vietnam movie that has been slated by critics and was ignored by the powerful counter culture. Nevertheless the movie showed the American soldiers serving in the unpopular war and when the critics tore it apart, they were not so much reviewing the movie but Wayne's politics - shame, on them. 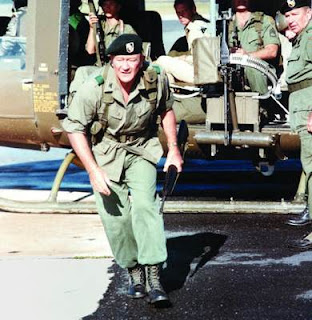 The Green Berets may not have the best characterisation in the world and it may even be old fashioned, structured like the old World War II films in which the Nazis and Japs were depicted as evil personified, but it's a rousing adventure movie. It may have had far too much flag waving but the one thing about Wayne is that he would never criticise his country - not a bad measure of a man, when all is said and done.
Posted by Gary Dobbs/Jack Martin at 02:11

He said blacks should only be able to join society when they get some education. On Thursday I was at the Pacific View Memorial Park where he is buried visiting someone else and the geezer who worked there pointed to the area where Wayne's grave was and I went and looked, the idiot got the wrong section and I never saw it.

Thanks for this. It gives a more complex view of the man behind the myth.