The Ballad of Delta Rose now scheduled for July 2011 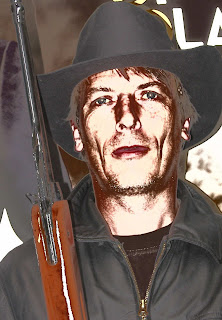 My third western for Robert Hale's Black Horse range, The Ballad of Delta Rose is now scheduled to appear July 2011 and will more likely turn up on Amazon for pre-order anytime over the next three months. I this week sent back the corrected proofs and the next time I see the book it should be in its finished form.

There are also large print editions of both Tarnished Star and Arkansas Smith imminent - all in all that Jack Martin guy's a pretty busy fella. And I'm very nearly finished with the sequel to Arkansas Smith which is provisionally titled, Arkansas Smith: The Tumbleweed Trail and is a story of legend and myth in the Old West.

A Fistful of Legends edited by Nik Morton and including, along with 20 other stories from today's finest western writers, my short story, The Gimp.

A Policeman's Lot, written under my own name of Gary Dobbs, this is a story of Buffalo Bill, Jack the Ripper and a Welsh copper named Frank Parade. Available now in eBook and Kindle with a POD edition to follow.
Posted by Gary Dobbs/Jack Martin at 03:46

Email ThisBlogThis!Share to TwitterShare to FacebookShare to Pinterest
Labels: jack martin, the ballad of delta rose

Another one I'm looking forward to reading.