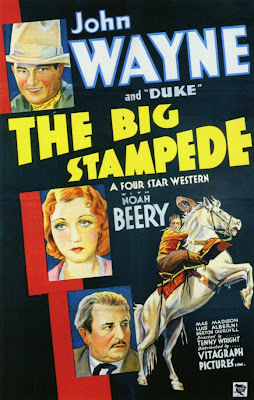 We noted last time that John Wayne nearly lost out on the deal to remake old Ken Maynard westerns for Warner Brothers when they heard rumors of his drinking and womanizing. When Wayne heard this, he reportedly stormed into the Warner offices and said, “I know who told you I was drunk. I know who told you I chase broads. The man who told you that is a dirty liar. And you tell Harry Cohn if he says that about me once more in this town, I am going to knock his teeth so far back into his throat he will have to eat his meals with his neck.” Sounds like dialogue written for McLintock. Anyway, Wayne got the gig, receiving $1500 for each of six pictures. And he married socialite Josephine Saentz, whom he’d been dating for almost seven years.

The Big Stampede (1932) was a remake of the 1927 film Land Beyond the Law. Wayne’s co-stars for this one were Noah Beery and five thousand head of stampeding cattle. Wayne plays a deputy personally appointed by Territorial Governor Lew Wallace to bring the cattle-rustling killer of a New Mexico lawman to justice. He hangs around town pretending to be a drunk until recruiting a Mexican bandit and his vaqueros to help him catch Noah Beery. Refusing to go down without a fight, Beery stampedes the cattle and it’s up to the two Dukes (Wayne and his devil horse) to save the day.

In reviewing The Big Stampede, the Motion Picture Herald said, “John Wayne’s drawl and deliberate style of movement are fitted to effect a likeable picture, made-to-order for theaters that draw upon folk from and near the so-called open spaces.”
Posted by Gary Dobbs/Jack Martin at 08:41