Black Panther gets his arse kicked 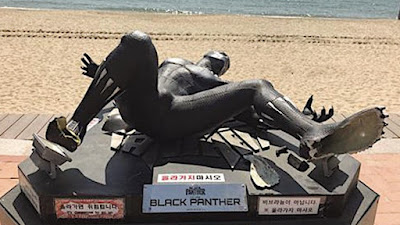 The Black Panther seems to have fallen foul to either film critics or rampaging DC fans in South Korea. Apparantly a 32 year old man has been arrested and charged with hero abuse or some such.

The Walt Disney Co. sent two statues of the superhero to Busan to celebrate Marvel Studios’ filming along Korea’s southern coast. But on March 17, according to The Korea Herald, a 32-year-old drunk man was arrested after he vandalized the statue in the Gwangbok-ro shopping district, and on April 21, the statue near Gwangalli Beach was toppled and part of its head broken off.

An official from the Korea Film Council thought someone had probably tried to climb the statue, despite numerous off-limits signs.
Posted by Gary Dobbs/Jack Martin at 02:35