Sounds of the Old West 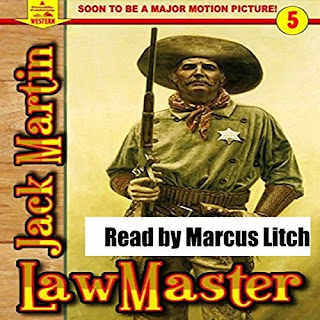 It was actually my first book published - back in 2009 I took the step from amatuer to professional writer when Robert Hale published my novel,  Tarnished Star as part of their Black Horse Westerns series. The hardcover did really well, remaining their fastes selling title, selling out its first print run on pre-orders alone. Fast forward to the 2018 and the book, now retitled LawMaster has been optioned for a film (although it seems stuck in development hell) and is now available as an audiobook read by the talented Marcus Litch. The reader does a great job in bringing the title to life.

All Sheriff Cole Masters wants is to raise a family with the woman he loves. But upholding the law in an era when gunfire speaks louder than words can be a risky business. Cole makes an arrest for the brutal murder of a saloon girl but the killer is the son of a wealthy rancher and it’s clear the old man will do anything to see his son set free. Soon the peace of the small town is shattered with deadly force and Cole finds himself a lawman on the run for murder. The rancher wants Masters dead and the two deadly gunmen on his tail are sure they can do it. Soon blood will run as Cole Masters attempts to reclaim his tarnished star.

About the author: Gary Dobbs is the man behind the Jack Martin pen-name and had a string of popular westerns to his name. He also writes on criminal and military history. His debut western, The Tarnished Star (now known as LawMaster) remains the fastest selling Black Horse Western ever. Adventure fiction, and particularly westerns, holds a special place in the author's heart, and he intends to be produce western fiction for as long as there are readers who want it.

The book can be found at Audible  -
In fact if you sign up for a trial with Audible you can get the audiobook of LawMaster for free.