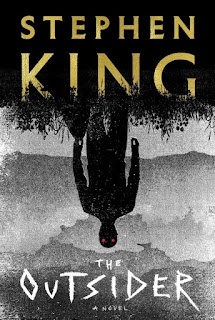 Stephen King's dislike of Kubrick's acclaimed movie based on his book The Shining is well known, and in his new book, The Outsider King takes a pop at the director. A character in The Outsider is watching Stanley Kubrick’s, Paths of Glory. The reason for this is  because she thinks it’s better than The Shining.

The Shining is widely considered one of the best horror films ever made, but King has never been shy about expressing his disdain for it. He’s referred to Shelley Duvall’s Wendy as “one of the most misogynistic characters ever put on film,” Kubrick as someone who “thinks too much and feels too little,” and the film itself as “a big, beautiful Cadillac with no engine inside it.”

Posted by Gary Dobbs/Jack Martin at 16:54

Email ThisBlogThis!Share to TwitterShare to FacebookShare to Pinterest
Labels: stephen king, the outsider