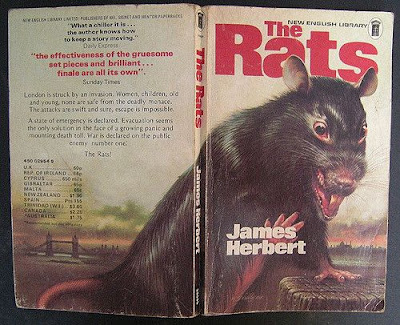 It had been an age since I last read this book - in fact I'd almost forgotten about it. It was one of those books I loved during my teenage years, and must have read several times. It had started my love affair with the much missed James Herbert; a love that still burns to this day.

I was reminded of  it after finding a battered old paperback copy amongst a box full of old paperbacks I bought from a local boot sale - A kind of lucky dip. The box was stuffed full of old books. handwritten, in thick black marker pen,  upon the side of the box was '50 paperbacks, mixed titles, £5 the lot'

Well how could I refuse such an offer! There were several Louis Lamour titles visible towards the top of the box, a couple of Guy N. Smiths and several Edge westerns. There was no way of telling what goodies would be waiting  when I dug into this box of ancient delights. It was exciting picking up the box and taking it to my own car boot.

When I got the box home I found it actually contained 58 paperbacks, making it even more of a bargain - twenty of these books were Louis Lamour titles, there were ten Executioner books, three James Herberts (the Rats being one of them), five Edge westerns, ten Guy N. Smith titles, the rest were madeup of books from the Keyhole Crime series, two of these were by Simon Brett - I do like Simon Brett. 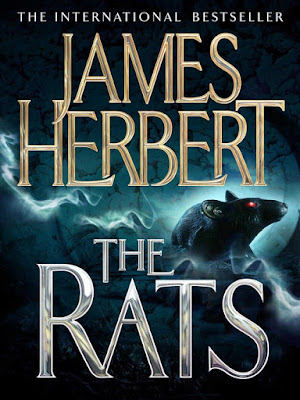 Anyway, I picked up the ancient copy of the Rats, taking in the aroma of its aged pages and started to read - three hours later I'd read the entire book.

In one sitting I'd lost myself in the grim world of 1970's London as the city suffered an onslaught of mutated rodents. When I'd last read this book I would have been a teenager, or in my early Twenties at the oldest. Back then I would have been a book obsessed reader who looked at authors as almost God like creatures, men and women who were set apart from the rest of us by their talent and brilliance. Now I'm in my early Fifties, a professional writer with several titles to my name in the bookshops, and I realise that published writers are not Gods, but merely people compelled by a need to tell stories. And you know reading the book now, coming at it not as a gore obsessed youngster but as someone who can understand the craft,  I think I really appreciated the brilliance of what Herbert did in this his debut book.

The story is told in a five act structure, superbly well paced with several interludes in which the reader gets to catch his/her breath before the mayhem starts again. There also a lot of metaphor that I likely missed as a younger reader - there is for instance a working class, semi-socialist subtext hidden amongst the horrific tale. It is true that the book has aged somewhat and some of it would fall foul to political correctness - blacks are described as coloureds (which was then the accepted term), women are not exactly passive but definitely second fiddle to the men, and homosexuality although treated with surprising sensitivity given the era, comes across as an abnormality. But then this was the early 1970's and the author is only describing the world he lived in at the time of writing. The London of this book for instance is very different to the city of today - The docks, which feature so prominently in the book as an industrial zone on its last legs has since been redeveloped into a gleaming and characterless ediface of neo-liberal greed. The now long demolished inner city slums are a breeding ground for the vermin who drive the story, and although these slums may now be consigned to the history books the city today suffers from a different kind of vermin, but don't get me started on that subject. 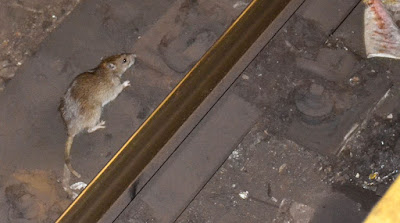 Back to the book.

The main character is Harris, an art teacher in an inner city school populated by tough as nails children. And after an opening in which an homeless homosexual is consumed by the rats we find our hero drawn into the story when one of his students turns up at school complaining that he has been bitten by rats. From there we are dragged through several set pieces - the underground scene is particularly effective as is the section in which the school is under siege from the killer rats. And the climax of the book is a masterclass in suspenseful pacing.

The Rats then is a far better book than I remember - yes it has all the gore that satisfied the teenage me, but there was a skilled writer at work here, and he delivered his story with panache and class. In fact for a book I must have read several times already, this reading was actually the most rewarding. It's quite brilliant.
Posted by Gary Dobbs/Jack Martin at 07:21