Book Review - Darkness on the Edge of Town Brian Keene 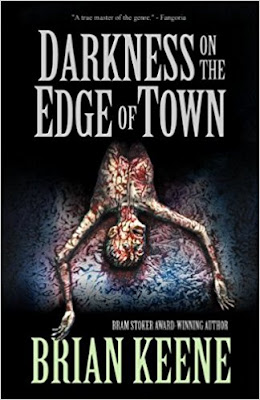 I really enjoyed this book, got sucked into the apocalyptic story but the ending just threw the whole experience for me - it was a cold ending that didn't offer any payback for the time spent with the characters. It's a pity, because the story itself was compelling.

Comparisons to Stephen King are inevitable - Darkness on the Edge of Town is  similar to some of King’s works, including The Mist and Under the Dome - In fact at one point in the novel the characters take a device - that of forming a human chain to enter the dark - used in Stephen King's, Mist. The author is aware of this and has one of the characters say, 'I got the idea for this from that movie, The Mist.'

I liked that; it made me smile.

And to be honest writers borrow ideas from other writers all the time - Stephen King's The Mist for example owes a lot to James Herbert's, The Fog. In fact I could make a long list of books that have used similar engines to drive their plots, and maybe that's a subject for a future post.


The plot is - one day the inhabitants of Walden, Virginia wake-up to darkness. The world as they know it is gone. All communication outside the town of roughly 11,000 has ceased, and an inky blackness has settled across the sky and near outskirts. The residents do not know what has happened or why. They don't even know if there is still a world outside the darkness, and it soon becomes clear that Walden may be the only town left on the entire planet.

The working class characters are superbly realised and the sense of dread drips from each and every word - the scene in a pet shop is particularly effective and if not for the ending I would have given this book full marks. Maybe the standard of the book was so high that delivering an ending that doesn't really go anywhere and wasn't really satisfying was even more galling. Still, I loved the book for the most part - this is the first I've read by this author, and I'll certainly be reading more.

Posted by Gary Dobbs/Jack Martin at 03:51