Stephen King's The Long Walk sprints towards the big screen 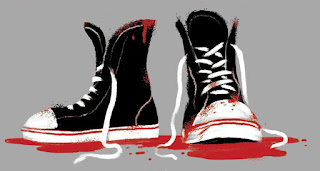 I remember it as a remarkable novel so the news that The Long Walk, which Stephen King wrote under his Richard Bachman name, is to be turned into a movie is interesting. The novel concerns itself with a mammoth walk and the suffering endured by those taking part. If you walk too slow, you get a warning and too many warnings and the guards shoot you dead.

The book is set in “a future dystopian America ruled by an authoritarian. The country holds an annual walking contest in which 100 teens must journey, non-stop and under strict rules, until only one of them is still standing alive to receive the prize. The story told of a 16-year-old walker named Raymond Garraty and the teens — some good, some bad, some mysterious — in his orbit.”

Think The Hunger Games but It's much more intimate and deep, it's more human, and it's not nearly as ridiculous and over-the-top.

James Vanderbilt (‘Trust,’ ‘Amazing Spider-Man’) has been set the job of adapting King’s 1979 novel ‘The Long Walk.’ for the screen.
Posted by Gary Dobbs/Jack Martin at 02:59