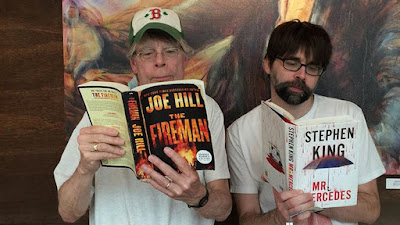 Father and son writing team, Stephen King and Joe Hill are to see their 2012 collaboration, In The Tall Grass  (about a brother and sister who become separated while investigating a young boy crying for help in a Kansas field.) is to be turned into a mini series by Netflix.

King's fiction has been frequently adapted into television and film, and projects inspired by the horror master show no signs of slowing down.

John Lithgow and Jason Clarke are slated to star in a new film adaptation of King's 1983 horror novel "Pet Sematary," which was previously made into a movie in 1989. Additionally, Universal Pictures won a bidding war last month to obtain the movie rights to "The Tommyknockers," King's 1989 science fiction novel.

Other projects based on King's work in development include a film version of his 1979 novel "The Long Walk" and a yet another limited series based on his 1978 novel "The Stand."

Joe Hill, on the other hand, is still a reletively new name in the genre, but is gathering much criticial and fan respect for his own work. He must be applauded for casting aside the looming shadow of his world famous father and developing into a unique voice.
Posted by Gary Dobbs/Jack Martin at 02:27