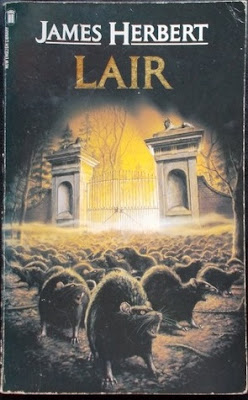 Lair is a sequel to Herbert's 1974 debut novel, The Rats and although it is more of the same it is very much a far more assured book than the excellent first novel. Between writing The Rats and Lair, Herbert published four other novels and his development as a writer is evident in the way Lair is structured.

The Rats simply powered along with no space for the reader to breathe but whilst Lair is also paced at a breakneck speed, it does offer several quieter character building moments. The slower build up to the mayhem is very effective, and the author teases the reader in several scenes in which characters glimpse the rats but they don't attack. Much more is made of the creatures intelligence this time around and it makes them all the more terrifying.

This time the action is moved from the London slums and takes place in and around Epping forest - there's a sub plot in which the forest gets the Amnity Island treatment when the authorities try to avoid closing down the forest to tourists when the mutant rats are first discovered, but as things escalate they have no choice and the forest is evacuated.

What follows is a tour de force of horror storytelling, leading to one of the most thrilling climaxes I've ever read. Excellent.

Posted by Gary Dobbs/Jack Martin at 14:21