The Return of the Sea Monkeys

I’ve talked about some of the more outrageous classified AD’s in old magazines before but this week I saw a Sea Monkeys set  – seeing the creatures (thingies) on sale reminded me of how they once seemed almost magical to me.


You see I was brought up in a small town called Gilfach Goch, which was three miles and the next left,  after the back end of beyond. Now as a kid growing up in the Seventies I had the usual boyish interests of the time. I wore t-shirts , flared trousers, bumper training shoes, and rode a Chopper bicycle while sucking on a spangle.Back then I had a mania for comic books. In those days the British comics – Battle, Action, 2000AD were my favourites but I would also buy the American titles when I had enough pocket money left over.

Now one thing that was always advertised in American comics at the time were a mysterious thing called sea monkeys. They looked so cool - little creatures that lived in a fish bowl and set up elaborate societies - least that's what the adverts suggested.  These guys looked so cool but it was frustrating as hell because there was nowhere for a British kid to get hold of them - it seemed that America had all the best tricks.

Man, having some sea monkeys of my own was a dream but alas, one that was tragically out of reach.

They looked so cute on the packaging and I know that, even as a kid, I should have known better but that was exactly how I imagined them to look. The AD's only cemented this delusion.


"Sea-Monkeys® are a true miracle of nature. They exist in suspended animation inside their tiny eggs for many years. The instant-life crystals, in which the eggs are enclosed, preserve their viability and help to extend still further their un-hatched life span! Sea-Monkeys are real Time-Travelers asleep in biological time capsules for their strange journey into the future!"

Anyway the years went by - hairstyles changed, flared trousers vanished, my Chopper was replaced by a drop handle - by this time I had acne and a new found interest in girls but still in the back of my mind I had this unfulfilled desire for some sea monkeys. 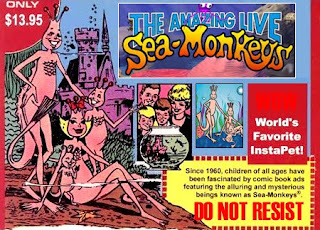 I eventually came across some in a joke shop in Blackpool when I was about sixteen - far too old for that sort of thing. But I bought them and couldn't wait to get them home and place them in a tank for the creatures to hatch. I started thinking up names for them and all of a sudden I was that young kid again.

Anyway they eventually hatched, were too small to see unless you held them up to the light and squinted and I quickly got fed up of them. Turns out they are actually a species of brine shrimp and they do not look like the illustrations on the packets. They're kind of boring and merely looked like tiny specks floating in water. I think I got drunk one day on booze stolen from a friend's parents and actually drunk my small bowl of water, sea monkeys and all.

And I tell you another thing thos 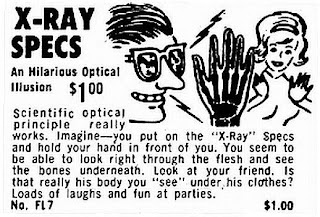 e X-ray specs that  allowed you to see through women's clothing didn't work either.


Sea monkeys are still available - in fact a bowl full of the critters are currently residing on my kitchen windowsill.

Check out the web site

Posted by Gary Dobbs/Jack Martin at 13:56