COWARD ON THE BEACH 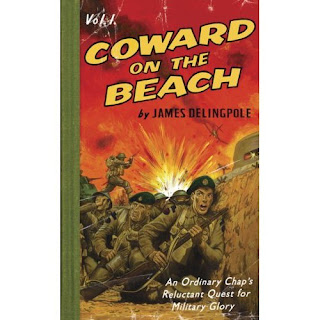 
Never judge a book by the cover - so goes the old adage. But that is precisely the reason I bought this book. The cover art - looking like something from one of the comic books I read as a kid - caught my eye and I bought it just for the illustration. If the book was any good then it would be a bonus.

AND WHAT A BONUS.

The novel starts off in the present day with the narrator stating that he must be dead, if we are listening to the tapes he recorded for his grandson before his death. He records his wartime exploits and the first person narrative is filled with passion, humour and large, almost poetic passages detailing the grim realities of war.

The book is marked as volume one and there are, I believe, ten planned for the full series. And when vol 2 comes out I'll be first in line for a copy. Dick Coward's adventures in which is tries to distinguish himself on the blood beaches of Normandy whilst worrying about his inheritance are laugh out loud funny but then by a clever literary turn of the coin the author gives us some truly moving sections.

This book is not my usual style of reading matter but I'm now a fan of this series which, I suspect, will build up a cult following over time and I don't think bestseller status is too far away.
Posted by Gary Dobbs/Jack Martin at 01:07

Do you know how many unread books I step over each day just to reach this computer? As if I don't have enough books waiting for me to get through - and you go and ignite my interest in this book. It's like offering beer to an alcoholic!

Was in Waterstone's today and made a hash of remembering the author, quoting James Dalrymple instead. As soon as I said 'Coward on the Beach' the assistant's face lit up in recognition and he ran over to the exact spot, handed me the book and proudly gave me a quick run down, ending with a triumphant, "It's the first in a series of ten, but no sign of the second yet".

Being tight-fisted, after perusing the book I replaced it and have just ordered the hardback edition through the online county library inter-loan scheme for just 80p. Felt a bit guilty about not buying direct from the assistant as he took great pleasure in displaying his knowledge of the book.

So, as it's only going to cost me 80p I suppose it's not so much damn you as thank you for highlighting this book.

- There's load's on the 'net about this author, he writes for a couple of papers and has a regular spot on The Spectator. He's very quotable too, with:

"Writing is a horrible business. It's an absolute nightmare job. The worst in the world. And the only way of making it bearable is to write about things that interest you and you care about. In a way, it's an exercise in stopping yourself getting bored."

You'll love this book - I'm saying damn you to the author because we've got to wait for a second. Good to know I've inspired you to read this modern classic.