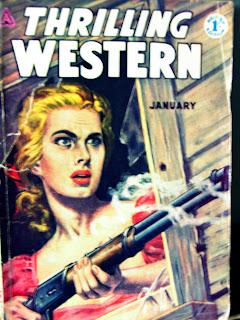 What a lovely little find - cost me £1 in the local Oxfam charity shop.

There are three stories contained within the striking cover and one novelette. The index page sits opposite one of those corny Charles Atlas adverts.

Night Ride by Phillip Ketchum (novella)
Last Job for a Lawman by Walker A. Thompkins
A Man Alone by Ben Frank
The Cottonweeds by Lee Floran


It must have been great to pop down the newsagents in the days of these pulp books. These days the magazine racks are far blander.

The magazine was published by Atlas Publishing from an address in London as well as a New York Office. 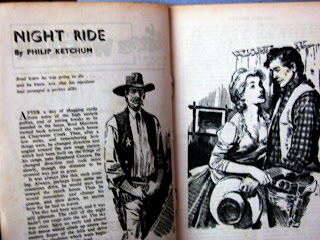 Even although this is a British edition the text has been reprinted directly from the American version - which shouldn't matter because for the most part the use of the English language, apart from the odd phrase or spelling difference, is the same. However our slang terms are alien to each other.

The first sentence of the 1st story, Night Ride goes: After a day of shagging cattle from some of the eastern gulleys, Brad Morrison turned back to the ranch house on Clearwater Creek.


HAD TO READ THAT THREE TIMES - TO UK READERS THAT SAYS THE CHARACTER'S BEEN OUT HAVING SEX WITH CATTLE. SHAGGING IN THE UK IS SLANG FOR INTERCOURSE. 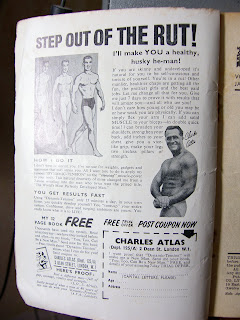 Bit of schoolboy humour there. Sorry

And here's me thinking bowlegged cowboys got that way from riding the range all day.

Great first line...reckon it might just make me dig out my copy of this and read the rest of the story!

These pulps often appear on ebay and I've managed to collect quite a few.

Looks like a good find. I laughed when I saw the Charles Atlas ad. They use to be in the back of every comic when I was growing up. Old Charles had been dead for years and they were still making money from him.