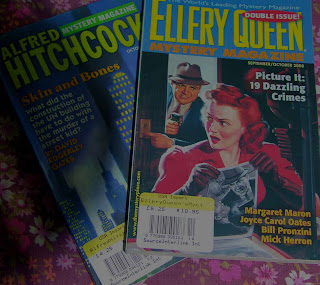 The big two magazines for crime and mystery lovers are on the bookshelves.

Ellery Queen this issue is another double that covers the months of Sep/Oct while Alfred Hitchcock is a single with the cover date October 2008.

Lately Ellery Queen has been topping Hitchcock in the cover image stakes with the former boasting a colourful pulp style picture of a red head being terrorised by a gunman. Whilst the Hitchcock has a rather bland if moody picture of a bunch of sykscrapers.

The Contents is both are up to the usual high standards. Not for nothing are these the two crime magazines that writers love to be published in.
Posted by Gary Dobbs/Jack Martin at 04:20

What do you think of later Hitchcock, like "Frenzy"? I saw that one recently and wasn't sure what to think.

Hitch but I enjoyed it all the same