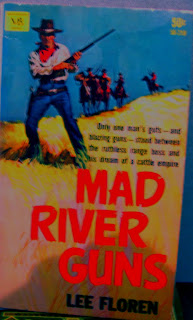 ARIZONA WAS BIG BUT NOT BIG ENOUGH FOR FRANK LaWALL

So reads the back cover for this western paperback that was published in the year of my birth. The copy I found is in remarkable condition, better than I am myself in fact.

It's basically a range war story in which ranch owner, LaWall tries to chase any settlers away so that he can lay claim to the lush lands. However when one nester by the name of Jib Hobson decides to fight back things get very deadly indeed.

It's a great old fashioned read - a well paced traditional western that I devoured in one fifty minute sitting.

Anyone know anything about this author?

A GOOGLE search on the author came up with the following list of books:

Non fiction
Crowned Harp: Memories of the Last Years of the Crown in Ireland (1960)
The American Dream: A History of the United States (1977)

Posted by Gary Dobbs/Jack Martin at 13:13

LOL - I agree. He must have slept that year. I wonder who was the pulp writer who wrote the most books? I was told recently of someone who did 100 books in a year.

I took a look at Riders Of death on my Blog- was happy to have more info from yours!