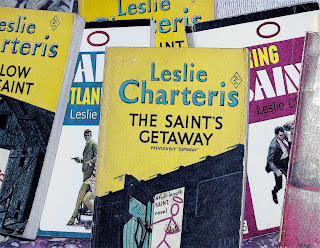 The Saint, created in 1928 by Leslie Charteris, but first glimpsed by these eyes during the early seventies in the dashing guise of Roger Moore in the long running ITC TV series. Course I remember one or two of the old black and white movies playing on BBC2 with George Sanders as The Saint but these were too dark for me at that time.

It took me years for me to come out of the comfort zone of the TV series but when I did I was delighted. And a study of the old movies led me to the original books which I devoured as a teenager, even sending my few quid off to join the world 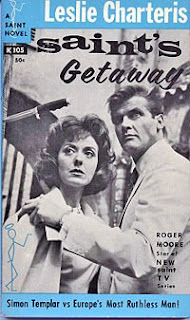 These days I think I know the character pretty well and have read most of the original novels and several of those written by other hands under the Charteris byline. I recently re-read The Saint in New York and was amazed to rediscover how hardboiled it was and how brilliant a concept was the character of Simon Templer. I've even managed to buy the entire run of the old radio series, starring Vincent Price as Templer from an Old Time Radio Dealer.
Posted by Gary Dobbs/Jack Martin at 03:06

I have a question. Exactly what does "hard-boiled" mean? I know it has something to do with crime novels, noir, etc. Is it a specific set of characteristics, or more of a mood or feeling?

Thanks for inspiring some thoughts of the Saint, one of the great fictional creations. I too love the books and don't think the character has ever fully come across in any TV or film adaptation - a totally free modern buccaneer and adventurer, beyond morality but doing the right thing for amusement.

My dad new one of the 'other hands' who wrote adaptations of TV episodes that came out in book form. He took me to meet him once when I was about 6 or 7. He wasn't as exciting as Simon Templar, or Leslie Charteris for that matter, but he did have a collection of music boxes.

Yeah I've read Modesty Blaze and will blog about them one day. Oh and Chris - yeah I suppose hardboiled is a feeling. Gritty, unrelenting

I don't think you've got the complete run of the radio show...it ran for several years but there's only about fifty episodes in circulation and most dealers don't seem to have the two Barry Sullivan shows which are rather good.