What a great purchase 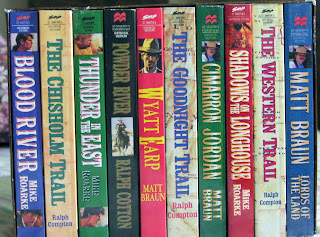 
What a bargain seeing as how the set is still sealed and in "as new" condition. Ten Western paperbacks. And although I've got a large westerns collection I only already own one of these books - The Chisholm Trail by Ralph Compton- So I'll thrown that back on E bay and make a little back. 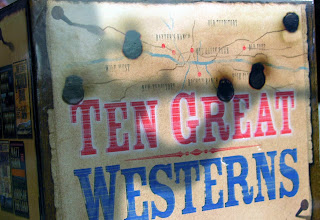 But what a great bargain for a Western nut!!!


Also purchased was five Hank Janson pulps - incredibly the Janson name would see over 9 million books worldwide in the hey day of pulp but is now mostly forgotten.

Infor on the Author -QUOTE " Ah, Hank Janson ...
'Brings back memories to me of well-thumbed paperbacks passed eagerly but surreptitiously hand to hand in UK barracks-rooms long ago ... Hank Janson [Stephen D. Francis] was a British writer of pulp paperbacks that were simply soft-porn tales under the guise of gangster novels. He wrote a couple of dozen of them, in a ludicrous "American" style that was even then seen as hilariously off-key. (Jansen shared this laughable ineptitude with American accents and slang as did James Hadley Chase [Rene Raymond] another British wannbe-Yank author of the time.] In his hey-day - 1946-1956 - Janson enjoyed large sales in the UK despite his corn-ball writing style, entirely because of their lipsmacking descriptions of female bodies and sex scenes that went as far as a British writer dared to in those days of strict censorship. Finally, Jansen just managed to avoid criminal prosecution on pornography charges, by skipping off to live in Spain. I think his publisher did serve a couple of years in jail on similar charges. It was amusing to me to see Jansen's name pop up again half a century after I last read one his paperbacks. It'll be interesting to see how reprints of his books sell now. What was considered pretty raunchy in the '40s would seem tame today compared with the almost obligatory obscenity in most books nowadays, regardless of genre. Here's a website about Hank Jansen:" unquote

Posted by Gary Dobbs/Jack Martin at 06:37

Till I read the full post I thought for a minute that Hank Janson wrote a few westerns and it made me all giddy. Have only read three of his books so far need to get more of them but hard to find used.

Stephen D. Frances (the creator and original writer of the Janson books) did write some westerns. The authority on all this is the diligent researcher Steve Holland. I can thoroughly recommend his biography The Trials of Hank Janson. If you aim to collect, or just read, the Janson books, it's the place to start.

Early in my career, I had the privilege to copy-edit most of Steve Frances's contributions to the Sexton Blake detective series. More than once, I was also the very first person to read his distinctive manuscripts when they arrived from Rosas, Spain.

It was sad that his worth was not recognized and rewarded in his later life.

In what way were his manuscripts distinctive?

Not so much in the writing style -- which conformed pretty much to Sexton Blake Library requirements -- as in the physical appearance. At that time, British writers used a paper size called "quarto", which preceded A4. Steve Frances, in Spain, was using a larger size, similar to the present US standard. Also the parcels came with Spanish postage stamps and customs stickers!

I usually saw Steve on the odd occasion he came to London and visited the Fleetway House offices: a slight, somewhat frail-looking man who hardly fitted the tough-guy Hank Janson persona! These days, readers are more sophisticated and accept that there's nothing untoward about that. Leastways, I hope they do . . . otherwise before next June yuh're gonna have to make yuhself over inta a long, tall Texan in a ten-gallon hat!

(Sorry about cluttering your blog with that deletion line. I spotted a typo after I'd posted my first comment.)

What do you mean? - I am a tall Texan with a ten gallon hat.