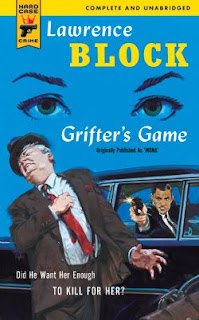 
Con man, Joe Marlin is a handsome guy and he uses his looks to trick wealthy women into parting with their cash. He's making a good living until he meets up with Mona Brassard - a woman more devious than he is and soon the conman finds himself tangled up in a deadly game involving a case of stolen heroin. And a woman who manages to break down his guard and set him on his way to becoming a killer.


Block writes well - his prose seems effortless and moves like an express train. One of his biggest strengths is his ability with characters and soon the reader finds himself tangled up in the story and unable to put the book down.

As is usual with all the titles in the Hard Case series the cover is a wonderful pulp style illustration. This time its drawn and printed by Chuck Pyle. The book was originally published under the title of Mona in 1961.

This was actually the first book in The Hard Case crime imprint and it's a great title to kick the line off with. Coming from early in the author's writing life it is not as sophisticated as some of his later works, but the plotting is excellent and things move at such a pace that the reader is left breathless.

QUITE SIMPLY PERFECT.
Posted by Gary Dobbs/Jack Martin at 16:18