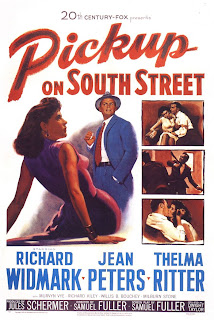 This is one of those films I know by reputation, having read reams of info on it, but never having actually seen. In Noir circles the movie is rightly hailed as a classic.

Thus I was pleased to see this DVD on the shelf of my local filling station. I've had some nice movies from the garage and all for less than a fiver. They tend to stock a lot of old movies at cut down prices and as old movies are my passion I'm in seventh heaven.


And so last night - rain hammering down on the window, the August wind shaking the trees and casting shadows into the bedroom, I'm tucked up in bed watching the Black and White images on windscreen. 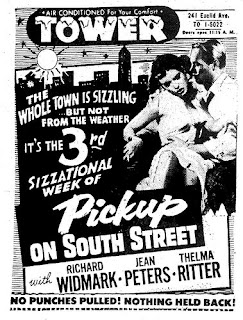 Richard Widmark gives a brilliant performance as a low life pick pocket who strikes lucky (or unlucky depending on your point of view) when he grifts a young woman, Jean Peters, on a train. It seems the woman is being used by communist agents and is carrying some microfilm containing stolen US government secrets.

In typical noir style the film uses shadows to create atmosphere and the dialogue is typically hard boiled.

Skip: Everybody likes everybody when they're kissing.


Candy: I've kissed a lot of guys and I've never felt like this.


The scenes between Widmark's character, Skip and the police are electrifying. The pace of the film would put most modern thrillers to shame. And every single scene shifts the movie forward 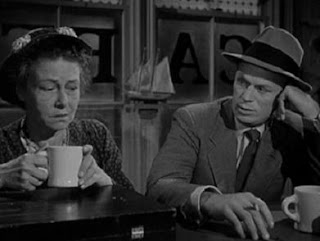 Thelma Ritter steals every scene as the aging stool pigeon. Mo. She provides much comedy as she hustles both the cops and crooks, selling each not only information but the cheap neck ties she uses as a front for her nefarious activities. But her character comes across as pitiful and evokes genuine sympathy in the viewer. We sense that she has been beaten down by life and is tired of the daily grind-her only ambition is to save enough money so that she is not buried in a pauper's grave.

A bit of research on the film came up with the fact that the film was dismissed during its initial release as a McCarthyist tract. It certainly seems black and white in its theme, without any hint of grey - the Americans are the good guys and the Commies are the bad. But there is a lot of subtext if the viewer looks deep enough and Fuller seems to be asking who is worse - the pickpocket, the communists, the American government or the brutal police. In a key scene Widmark says - 'Don't give me any of that patriotic eyewash.' This seems to hint that patriotism can be used to blind us to the evil and dangers of those in power that claim to represent us.

I loved the movie and am glad to have finally watched it.

It's quite perfect for late night viewing.
Posted by Gary Dobbs/Jack Martin at 17:24