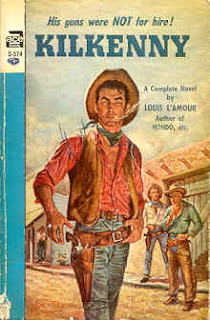 First published in 1954, this became the first in the Kilkenny trilogy about the reluctant gunman, Lance Kilkenny.

He came to the valley of the whispering wind a man who rode with the caution born of riding long on strange trails in a land untamed and restless with danger. Kilkenny could find no peace in the valley, for he came with a reputation for a lightning draw. Eager gunmen arose like coyotes to test him. One trigger happy victim was a Tetlow. Old man Tetlow was a hard man driven by greed to build a cattle empire. Now he would use every ruthless killer he could hire to fulfil an even more powerful urge to destroy Kilkenny.

The novel starts off with Kilkenny challenged by a foolish young man who is looking to make a reputation for himself. He forces a draw and Kilkenny kills him. Later we learn that this man is the son of wealthy and brutal rancher, Tetlow.

Soon Kilkenny's dream of building a ranch and leaving the life of a gunman is threatened when he faces danger greater than even he has ever known.

LAMOUR IS SO EASY TO READ - his prose style is deceptively simple and the author always could drag a reader into a story and keep them there.

Brilliance from the late great master.

There are actually three Kilkenny novels and three short stories but when people speak of the trilogy it is usually to the series of novels featuring the character that they refer.
Posted by Gary Dobbs/Jack Martin at 18:04

Hey, great review! Sorry I missed out on this one. I've been busy the past few days--you can check on my blog and probably be able to tell why. (: Anyway, my email is cjones@harbornet.com. If you read another LL book or have another idea, I would be happy to post a review by you. I am reading "Beyond the Great Snow Mountains" next. Could you pick a story from that book and review it? If you'd prefer a novel, that's cool, too. Just let me know and send the review to my email. Really appreciate it!

By the way, have you heard the audio adaptation of the short story "A Gun for Kilkenny"? For my money, it's the best of all the ones Beau L'Amour has done.

"...his prose style is deceptively simple..."

- And there you have it. It takes the greatest skill to make something appear effortless and deceptively simple. Usually, the sign of a master craftsman.

Sorry to call a foul on this but Killkenny was not the first book of the trilogy. this was actually the second book, when it was retitled.
The Rider of Lost Creek
A Man Called Trent
The Mountain Valley War

All the stories deal with Lance and Nita, and he meets Nita in The Rider of Lost Creek.