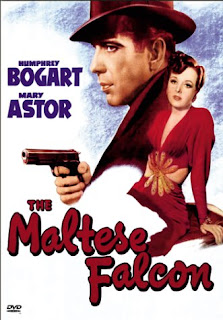 
I seem to be on a noir kick at the moment. Maybe it's something to do with the atrocious weather. There's something lush about lying in bed, the rain hammering against the window while old moody black and white images play across the screen.

This film is so well know that I won't go into the plot except to say that it still holds up today.

The film belongs totally to ugly/handsome Humphrey Bogart and that's saying something for his brilliant performance given that the supporting turns from Lorre and Greenstreet are textbook acting.

The DVD Region 2 release is, as expected, short on extras but there is an interesting feature looking at Bogart trailers.

The book had been filmed twice already, as Dangerous Lady and Satan met a Lady in 1931 and 1935 respectively. Both versions flopped.

This was Bogart's first real starring role after a string of classic supporting roles.

George Raft turned down the role of Sam Spade before it was given to Bogart.
Posted by Gary Dobbs/Jack Martin at 14:46

A film that you never get sick of watching. It's tough to write quality posts about the classic PI books.(Hammett, Chandler, Ross Macdonald) Almost everything has been covered about them. I admire those who try.

Definitely agree. This one is a classic. I also like The Big Sleep. My favorite, although I'm not sure if it's technically noir or not, is Double Indemnity.

How would you feel about reviewing "Meeting at Falmouth" and then "Roundup in Texas" from Beyond the Great Snow Mountains? Two different kinds of stories: one an historical adventure of sorts, the other a western featuring one of LL's recurring characters, Ward McQueen. Like you said, you probably have these stories elsewhere. The reason I suggested these two is because "Falmouth" is short. Let me know what you think!

Yeah August - is there anyone who hasn't seen these films umpteen times already?

RE Chris - I'm onto the Lamour stuff - expect somthing after the weekend.

REC CHRIS -NOT SURE IF IT'S NOIR OR NOT. I agree but there are conventions here that define the noir genre - the snappy one liners, long continuous shots, the moody atmosphear. And there are those that claim it's the first noir movie

I just feel it's too breezy and bright for noir but whatever the label, it's a great film.

Sounds good, arch. I think you have my email. Want to just send them to me that way?

Also, feel free to give a spur rating, anywhere from 0-5. You can add "half" spurs, too.

Thanks and looking forward to the reviews!