The DVD's been sitting on my shelf for a few months now, but for some reason I hadn't gotten around to watching it till now. And you know I thought it was excellent. I knew nothing of the true story upon which it was based and I had purposely avoided all reviews of the film. I loved Clint Eastwood as a cowboy, cop and country crooner and I love him even more as a director. He makes the type of films they used to make - where story, acting and plot are much more important than special effects. I guess you could say he makes films for an intelligent, grown up audience.

Angelina Jolie is excellent in the role of the mother whose son is missing and so nuanced is her performance that the viewer is often unsure if she is indeed suffering from delusions and whether the kid the police have returned to her is indeed her missing son.  Of course any familiarity with the true life case upon which this film is based will forewarn the viewer about what is really happening, but the story is so gently yet powerfully played out, that the viewer is sucked into the movie. There's no escape until the final frame. 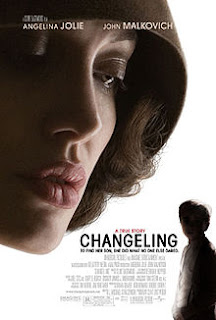 This is not the sort of movie I would usually watch and were it not for the fact that Eastwood, an all time idol of mine, directed it I probably would have avoided it.

Clint is known for being a very straight forward director. He shoots short days, he uses essentially the same simple score in all his movies and he avoids visual effects for the most part, all the while, however, he manages to make a lot of great movies and this is one of them.  There are two main special features on the DVD, one focusing on Angelina Jolie becoming the main character of Christine Collins, while the other is a quick, thirteen minute featurette on the making of the film.

Ahh well it's Invictus next for me, which has also been sitting, unwatched,  on my shelf for quite some time.

Posted by Gary Dobbs/Jack Martin at 23:33

It was written by Bab 5 creator Joe Michael Straczynski back in the 1980s! Took him a long while to get it sold!