Elvis is back in the building 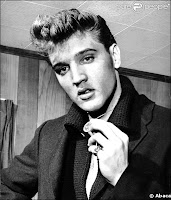 Incredible that it's been 34 years since Elvis Presley died - and he's still as popular as ever, more so in fact and although much of the Elvis industry is tacky there is no disputing the importance of Elvis as a performer and a truly innovative one at that.


"Before Elvis there was nothing." John Lennon

As a kid I used to think Elvis was the epitome of cool and would even watch those movies which were always playing on TV during the school holidays, but as I grew older and discovered other forms of music I turned away from the music of Elvis Presley, considering it trite, mediocre - and a great deal of it was. Those costumes he wore on stage made him look like a strutting peacock and every time he was featured on the news he seemed to have gained yet another chin. The world had moved on and Elvis, it seemed, had been unable to move with it and now well into middle age he was still belting out those songs that had sounded fresh coming from a slightly raw kid, but seemed like parody coming from the middle aged fat man. 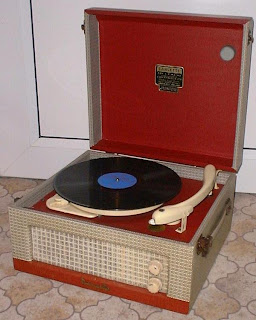 I remember the first record player I ever owned - it was a Dansette which was shaped like a suitcase, carrying handle included on the side. I got this for Christmas when I was ten years old and I had two LP records with it - Elvis's Christmas Album and a tribute to the Beatles. I didn't really like the Beatles one at the time, as it wasn't the real Beatles but some tribute band, and besides all I knew of the Beatles when I was ten was that it was some group my Dad would mention from time to time. But the Elvis one was played to death.

Then in 1977 Elvis Presley died, but I was twelve years old at the time, just discovering punk music and Elvis had long ceased to matter to me. Why should I, a snobby nosed kid from the black Welsh Valleys, give a shit about a middle of the road American icon?

It was only in later years that I began to rediscover Elvis and although there is still a large ratio of trash amongst his canon, there is much that is as important as any music ever recorded by anyone. Almost all of his tracks for Sun are indispensable, as are his first two RCA albums. Elvis is Back, his first album after leaving the army, is also excellent and showed a maturity both in choice of songs and  the performance itself. It all went wrong shortly afterwards with Elvis becoming a star in a string of bad movies with inane soundtrack albums. The Elvis that came back from military service was not the hip cat who first put on the uniform. Indeed the few Elvis movies that can be considered classic came from the first period of fame before he was drafted into the army. The military it seemed did something to Elvis - tamed him,perhaps. 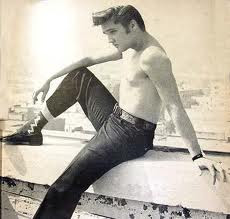 There were though later triumphs - the excellent 68 comeback special and a string of albums such as Elvis in Memphis, Elvis Country, Back in  Memphis and That's The Way It Is spring to mind.

It's not surprising really that Elvis in his afterlife has become even more of a product than he was when alive. He was used as a commodity throughout the movie years and even beyond with the gruelling Vegas shows. And that's a shame because it often obscures the fact that Elvis was a truly great artist, as important in the development of popular music as anyone. In life he became wrapped up in his own myth and lost himself beneath all the trappings of showbusiness and in death the real Elvis is buried deeper still. It's not about the flashy suits and saccharine ballads, but about those first few years, back when the world was black and white, when the young man revolutionised music and changed the world. He truly did, you know.

These days I know I was wrong to discount Elvis and am a born again fan and so in honour of the King, on this anniversary of his death, here are my choice of five essential Elvis albums.

Elvis  Prelsey (1956) This is the first album for RCA Records. As famous for it's pink and green lettering and its cover design, as for the music itself. This is punky rockabilly Elvis with not a bad track among the set. Listen to Elv's take on Ray Chares's I got A Woman and prepare to be rocked.

Elvie (1956) The second RCA album was more polished that the previous volume and much of the rawness taken away. But mawkish Old Shep aside this is still a great record.

Elvis Sunrise (1975) This compilation  contains all of the tracks the young Elvis laid down for Sam Phillips and Sun records. And it's absolutely excellent - this is Elvis at his best. Raw, bluesy and magnificent. The video embedded below comes from these sessions.


Elvis is Back (1960) Elvis launched himself into recording this album directly after leaving the army, acting as producer and having free reign on the choice of tracks. The work shows a more rounded side of Elvis with the singer flirting with jazz as well as the more usual blues and rockabilly. After this master-work came the soundtrack to GI Blues and the real Elvis seemed lost forever.

From Elvis in Memphis (1969) Perhaps the last truly great album Elvis would ever make. Producer Chips Moran pushed Elvis every step of the way and this resuled in some of the greatest emotion ever heard in that remarkable voice. Excellent.


The music will live forever

Posted by Gary Dobbs/Jack Martin at 07:02

Great post.
Like you, in my youth I wrote off Elvis, couldn't understand how he was compared to the Beatles in terms of talent. Now that I'm older and wiser I "get" Elvis, particularly the gospel and Americana-side of him. This was aided by a trip to Memphis & Tupelo, to see his roots and learn more about the person. He was truly unique, a one-off.
I also recommend Hank williams btw; another name I'd heard my whole life without understanding all the fuss - happily, I now "get" him too!