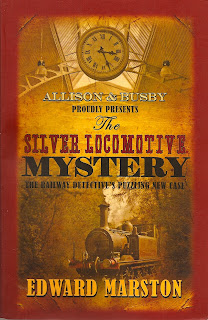 Available in print and as an eBook.

This is the first book I've read in the popular, Railway Detective series. I like historical crime thrillers, indeed my own, A Policeman's Lot is in the genre. The blurb revealed that the book was set in Cardiff in the year, 1855 and seeing as I know modern Cardiff so well I couldn't resist picking up the book.

The first page tells us that we are in 1855 which allows the author to be sparing in his historical detail and concentrate on the plot. Though there are some nods to the time and place and it is clear that the author knows the period well.

The plot concerns the murder of a young man named, Hugh Kellow in a Cardiff hotel room and the theft of a silver coffee pot made to look like a locomotive. The railway detective, Robert Colbeck is called in and together with his trusty sergeant Leeming who acts as a Watson to Colbeck's Holmes he sets out to solve the case.

It's a cozy crime novel that uses the locked room scenario for its mystery and is thoroughly enjoyable - if you like Conan Doyle and Agatha Christie, then you'll fell at home with this book. I enjoyed it enough to promptly buy another two novels in the series for my Kindle, and there can be no  better recommendation than that.

Posted by Gary Dobbs/Jack Martin at 19:45