To the Devil an eBook 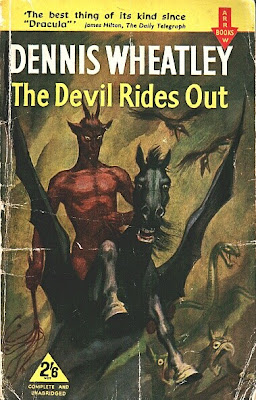 It’s a reality as strange as any presented in his novels, but Dennis Wheatley, one time a household name, a horror superstar before Stephen King even picked up a crayon, is largely forgotten by horror fans while his influence is still felt in the modern genre. Whilst Wheatley may not have been the first author to offer satanic stories to his audience, he was certainly the first to score real mainsteam notice with the genre.

For more than three decades he was the world’s bestselling author. Indeed during the 1960′s his publisher were selling over a million copies of Wheatley’s book every year. And the news that the backlist is soon to be made available as eBooks is very welcome.

Some of the author’s works may be hard on modern sensibilities – The Irish Witch (1973) for instance is racist in the extreme and also offensive to the working classes, but if one can overlook these attitudes (which were of Wheatley’s generation and class) then there’s a fine story to be found. Written in the Gothic style, which was even then dated, the book tells of The Hellfire Club which is being revived by a woman who calls herself The Irish Witch. 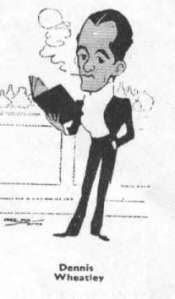 “I desire to state that I, personally, have never assisted at, or participated in, any ceremony connected with Magic – Black or White….Should any of my readers incline to a serious study of the subject, and thus come into contact with a man or woman of Power, I feel that it is only right to urge them, most strongly, to refrain from being drawn into the practice of the Secret Art in any way. My own observations have led me to an absolute conviction that to do so would bring them into dangers of a very real and concrete nature.” (DENNIS WHEATLEY)”

Several of the author’s other occult tinged novels are also classics – The Devil Rides Out, To the Devil a Daughter are just two of the many titles that are worth seeking out as more and more become available as eBooks.

Posted by Gary Dobbs/Jack Martin at 07:58

Don't know if you saw this on my blog back in January, Gary: a guest post from Michael Barber, who interviewed Wheatley shortly before his death:

I read and reread TDRO quite a few times as a teenager, though none of his other works. A pretty good movie was made of it as I recall too. Funny how Wheatley has been forgotten. As you say, the closest we had to a Stephen King back in the day....
Thanks Nick for the link - wow, DW had quite a life!

Did you know you've been on the blog list over at the Dennis Wheatley Project for ages now?

thanks for sharing this site. you can download lots of ebook from here