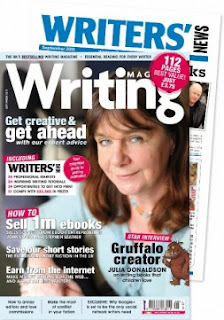 There's an interesting article in the current Writing Magazine, in which author's Stephen Laws and John Locke reveal some of the secrets behind their eSuccess.

John Locke, the first self published author in the world to sell a million Kindle downloads, stated that self publishing was the only choice open to him - 'I was an unproven author,' he told the magazine. 'I had no track record and didn't think it made sense for an agent to represent me, or a publisher to sign me.'  Stephen Leather on the other hand came from traditional publishing and has a long track record behind him, but the author was lured to eBooks initially as a way to bring books that his publisher passed on, because they were unlike his regular thrillers, into print.  'I first realised eBooks were going to boom,' Leather told the magazine, 'When I read that the Kindle was set to become the most gifted Christmas present in 2010. Literally millions of people would be getting a Kindle and looking for something to read.'


The magazine presents the interviews with Leather and Locke as two separate articles and although they both cover the same ground, the author's have very different stories to tell. There are common factors such as the use of social media - Facebook, Blogs, Twitter and the like -  to sell eBooks which both men champion. Stephen Laws claims that his success with eBooks has even seen a spike in sales for his traditional books which are still published by Hodder. Leather states that when Hodder agreed to sell the eBook of Hard Landing for 49p they sold almost 100,000 copies and then saw other Leather eBook titles which were priced at £4.99 start to claw in extra sales.  Leather also states that since moving into eBooks he now writes more. He used to produce a thriller a year for Hodder which he still does, but in addition to that he is also writing books solely for the eBook market.

Another point both authors agree on is that pricing eBooks as low as possible is the smart move, but he does admit that readers often equate price with quality and some won't buy a book that is too cheap because they assume it's not very good. John Locke who has sold 1.2  million eBooks at 99 cents and netted the author $420,000, recently brought out a title called, How I sold 1 Million eBooks in a year which was priced at $4.99. That title sold over 6,500 in its first week, and is still selling strongly.

Although both writers have something else in common - the fact that they can  both write. John Locke may have been unable to find a traditional publisher but I've read several of his books and his style is both clean and pacey and Leather is, of course, an highly accomplished thriller writer. So talent would also seem to be a factor in eSuccess.

Ahh well, looks like there's no guarantee of success but somewhere, at this precise moment, someone is slaving away at the keyboard, someone who will emulate the success of both Locke and Leather.

The articles are well worth reading and  the Writing Magazine  September 2011 issue is available now from newsagents and most large supermarkets.

Posted by Gary Dobbs/Jack Martin at 06:33

Can you explain more about what it is you like about John Locke's writing? I did a post about him on my blog. I always come away feeling like I read someone's wet dream instead of something with any merit.

Well for one thing Locke's style is very easily read - pacey and that's what matters when you want a quick fiction fix. And as for the content - well Locke is carrying on a long tradition. And besides if he was that bad I don't think he'd hit anywhere near a million downloads.