Laurel and Hardy's made 106 films as a double act and out of their entire output it is the work they did for the Hal Roach studios that is their best remembered and most highly regarded. In their crumpled suits, bowler hats they are without a doubt the most recognisable comedy team in the history of screen comedy. They appeal across generations and are still popular today. Their particular blend of slapstick is truly timeless and hilariously funny.

The films they made for Hal Roach are available on DVD, both as separately and as a 21 disc box set. All of the classics are here - Sons of the Desert, Way out West, The Music Box, A Chump at Oxford, Brats to name but a few - most are available on the discs in two versions, one being the original and the other having undergone the colourisation process. The discs also contain a large amount of lesser known silents and shorts. 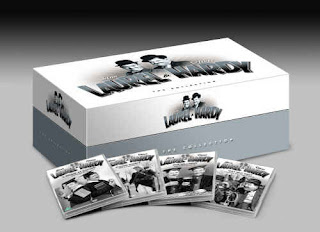 "Mr. Hardy told Mr. Laurel to meet him at the Southern Pacific Station Wednesday morning - So Mr. Laurel went to the Santa Fe on Thursday afternoon - " 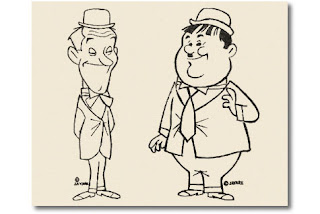 Stan Laurel was the creative powerhouse behind the successful duo, but to dismiss Ollie as a mere stooge is to do the team a great disservice. Stan may have slaved away pefecting their routines, while Ollie prefered to spend time between takes on the golf course, but when they came together a magic happened and neither of them were as good seperately.

Laurel and Hardy are up there with the Three Stooges and Abbott and Costello.

Far as I am concerned, Laurel and Hardy are the best comedy duo ever. Huge fan of theirs as a kid, and their material is timelessly hilarious.

In my home Laurel & Hardy are immortal. They continue to make our weekends. Buster Keaton, Marx Brothers and Charles Chaplin are in close pursuit.