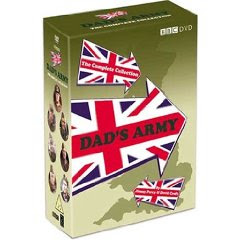 d here, though the missing episodes do exist as audio and these recordings are included as special features. The show ran from 1968 - 1977, for 9 seasons with 80 episodes including a couple of Christmas specials And excluding the missing episodes I've watched them all since Christmas. It really does stand up as one of the best sit-coms ever made, perhaps the perfect sitcom.

Season 7 is a the only weak season - perhaps because of the death of James Beck (Walker) towards the end of season six. A new character is brought in, the dippy welsh photographer Private Cheeseman. The problem is that the character's lines sound like Walker lines and sometimes the character is just too silly. Even in the slapstick world of Walmington-on-Sea the Taffy stands out like a sore thumb. Interestingly the episode in season six that they were working on when James Beck died, should have been canned as the episode makes no sense. Beck had shot the loc 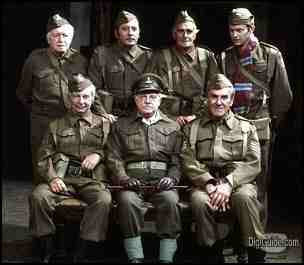 ation footage but not the studio work, which results in him suddenly popping up mid episode when he wasn't seen earlier.

Season eight was a return to form, the Welsh character having vanished, and once again the group dynamic is correct - though James Beck's absence is noticed. Still season eight contains some classic episodes as did the following season, the last, when the actors really were showing their ages. John Le Mesurier especially seems to have aged by season 9. Ironically Godfrey, both the oldest actor and character, doesn't seemed to have aged a day since the first episode.

And speaking of classic episodes - Keep Young and Beautiful always reduces me to tears of laughter. In this episode the older members of the troop use Fraiser's embalming fluid in order to hide their wrinkles. Menace from the Deep is another classic that showcases the Jones character, played wonderfully by Clive Dunn who, despite playing the aged butcher, was actually 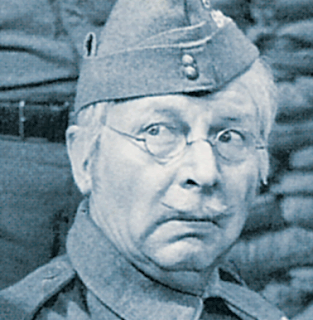 the third youngest member of the cast. The actor recently celebrated his 90th birthday which means he would have been in his forties when the show started. All in all there are too many classic episodes to bring attention to them all, but with the exception of the one poor season the show never missed.

The show was set during World War II and concentrated on the Home Guard (Originally called the local defence volunteers before the name was changed because the press claimed LDV stood for look, duck and vanish.) and although many real life men who had been members of the home guard initially objected to the show, it went onto become a national institution. The show was responsible for several catchphrases that entered the British lexicon - 'they don't like it up em', 'stupid boy', 'you're entering the realms of fantasy now', or the wonderfull , 'we're doomed.'


Originally intended to be called The Fighting Tigers, Dad’s Army was based partly on co-writer and creator Jimmy Perry’s real-life experiences in the Local Defence Volunteers (later known as the Home Guard). Perry had been 17 years old when he joined the 10th Hertfordshire Battalion and with a mother who did not like him being out at night and fearing he might catch cold, he bore more than a passing resemblance to the character of Frank Pike. An elderly lance corporal in the outfit often referred to fighting under Kitchener against the "Fuzzy Wuzzies" and proved to be a perfect model for Jones.

The success of the show is in the characters and the fact that the viewer loves them all - Mainwaring, always the most pompous, shows his human side in several episodes and comes across as a decent man living in strange times, Sgt Wilson, brilliantly laid back but with hidden depths, Jones, the bloodthirsty veteran with a love of the cold steel, Godfrey so polite that he'd apologise after shooting a Nazi, Walker, the wide boy with a heart of gold, Fraiser the wild eyed undertaker with a penchant for idle gossip and Pike, the stupid boy. All in all its an ensemble made in comedy heaven.
.
Posted by Gary Dobbs/Jack Martin at 11:04

Would like to see this. Will check with Amazon to see if it's available in US.

Dad's Army's the most brilliant show ever shown. I love it!