Now this is interesting - 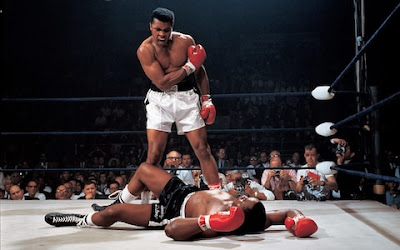 CBS All Access is developing “8 Fights — The Life of Muhammad Ali,” a limited series that will tell the story of eight critical moments in the life of the legendary boxer. Each of the eight episodes episode will be framed by one of Ali’s fights. The story of each episode, however will focus on Ali’s internal struggles and the drama of his life outside the ring. The project will explore the heart and mind of one of the most consequential and controversial figures of the 20th century.

The limited series will be produced by CBS Television Studios in association with Morgan Freeman’s Revelations Entertainment, and is based on the recent biography “Ali: A Life” by Jonathan Eig. Dan Kay will serve as writer and executive producer. Freeman, Lori McCreary and Beth Miyares will exec produce for Revelations Entertainment. Erica Shelton will serves as a consulting producer through her overall deal at CBS Television Studios.
Posted by Gary Dobbs/Jack Martin at 02:50