On My eReader - Lee Goldberg

This week's On My eReader features  Lee Goldberg, an ex-Navy SEAL, freelance Sexual Surrogate and a professional Daniel Craig impersonator. OK, not all of that may be true (though Lee) reckons it  is.

What can be verified is that - Lee Goldberg writes books and television shows. With an impressive list of credits - Goldberg broke into television with a freelance script sale to Spenser: For Hire. Since then, his TV writing & producing credits have covered a wide variety of genres, including sci-fi (seaQuest), cop shows (Hunter, The Glades), martial arts (Martial Law), whodunits (Diagnosis Murder, Nero Wolfe), the occult (She-Wolf of London), kid’s shows (R.L. Stine’s The Nightmare Room), T&A (Baywatch, She Spies), comedy (Monk) clip shows (The Best TV Shows That Never Were) and total crap (The Highwayman, The New Adventures of Flipper).

Lee  published his first book .357 Vigilante (as “Ian Ludlow,” so he’d be on the shelf next to Robert Ludlum) while he was still a UCLA student. The West Coast Review of Books called his debut “as stunning as the report of a .357 Magnum, a dynamic premiere effort,” singling the book out as “The Best New Paperback Series” of the year. Naturally, the publisher promptly went bankrupt and he never saw a dime in royalties.

His many subsequent books include the non-fiction Successful Television Writing and Unsold Television Pilots as well as the novels My Gun Has Bullets, The Walk, King City, McGrave, Dead Space, and Watch Me Die, which was nominated for a Shamus Award for Best Novel from the “Private Eye Writers of America.” He’s also the writer/co-creator of The Dead Man, the monthly series of original novels published by Amazon’s 47North imprint, and co-author with Janet Evanovich of the five international bestselling Fox & O’Hare novels (The Heist, The Chase, The Job, The Scam and The Pursuit) and two New York Times bestselling prequel novellas (The Shell Game and Pros & Cons).

Despite all that success Lee claims, again unverified,  that he is perhaps best known for his pioneering work mapping the human genome and negotiating the North American Free Trade Agreement.

OK stop all that, let's tear Lee away from his covert operations and get him to explain the contents of his eReader..

And so it's over to LEE GOLDBERG

My Kindle is always near-bursting with books I've yet to read -- and books I'm currently reading. I can't read two novels at once, but I can balance a novel and a non-fiction book. I recently finished Anthony Horowitz's wonderful MAGPIE MURDERS, which is an incredibly clever homage to Agatha Christie-style mysteries while, at the same time, working as truly contemporary whodunit while also skillfully deconstructing, and ruminating upon, the genre. If that sounds like a magic trick, it is. Pure briliance. 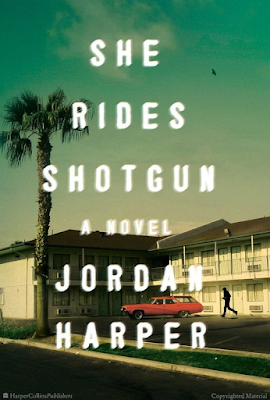 I followed that up with Hannah Tinti's Edgar-nominated THE TWELVE LIVES OF SAMUEL HAWLEY which is a remarkable book about the relationship between a young girl and her widowed, fugitive father...a man covered with bullet wounds that chart his violence-plagued life.

While reading those, I skipped between two terrific TV reference books by Richard Irvin -- FILM STARS' TELEVISION PROJECTS and THE EARLY SHOW, which covers series from 1944-1949. Both books are brilliant and red meat for TV history junkies like me.

Next up are SHE RIDES SHOTGUN by Jordan Harper and WONDER VALLEY by Ivy Pochoda. In between, I have upcoming books by Dave Putnam and Simon Gervaise to read and likely blurb.

On the non-fiction front, I've just started reading MR. NOVAK, by Chuck Harter, a reference book about the classic early TV series that starred James Franciscus. Pretty soon I'll also have to start reading a stack of books as research for my next novel...but I'm keeping those titles a secret (I don't want to tip what I'm writing about!).

Posted by Gary Dobbs/Jack Martin at 04:38

Email ThisBlogThis!Share to TwitterShare to FacebookShare to Pinterest
Labels: lee goldberg, on my ereader