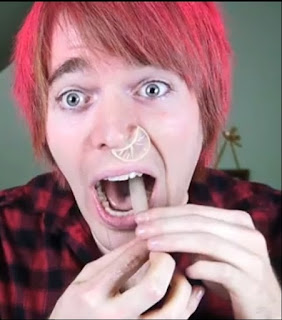 Kids these days - apparently the latest craze among young folk who really should spend their time better is snorting condoms.

In condom snorting, teens take an unwrapped condom and put it up their noses. The teens then inhale the condom until it comes out of their mouth.

While not an old challenge, it has become more popular in recent weeks.

Due to choking hazards, condom snorting is dangerous and could cause serious health issues and death.

WTF is wrong with kids these days? Back in my day it was eat a packet of cream crackers without taking a drink, or consume thirty cream eggs, but seriously the world's gone mad.

Posted by Gary Dobbs/Jack Martin at 10:06