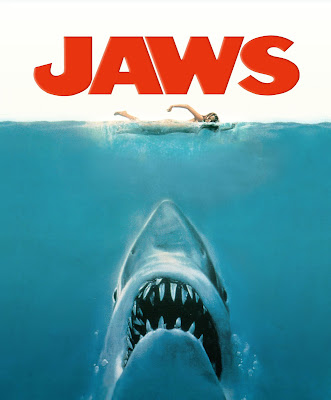 After a late night, and one too many whisky's I just wanted something to watch that would pass the time until I fell alseep, and cruising Netflix I came across Jaws and thought, 'WHY NOT' - I'd not seen the film for a good few years, though at one time it was one of my favourite movies - such a pity the sequals were so poor-, and I thought I'd see how it played now. Would it be as good as I remembered? Would it still work?

I can vividly remember the first time I saw this movie - it was in my local cinema,The Workman's Hall, around 1976 when the hype for this movie was still at its peak. Back in those days big movies took months and months to get to my local cinema in my small Welsh town. You know, I was 11 years old when I went into the cinema to see this - back then age didn't matter and I saw a fair number of the Hammer X certificate movies on my the big screen back in the day; not to mention the Confessions movies. Back then they didn't take any notice of film classification and were happy for you to go in just as long as you paid your money - probably less than a pound for entry back then. 75P seems to stick in my mind.

I had my younger brother with me when I went into see this movie, so he would have been about 9 and I still remember, that when the Duh Duh music started with the first frame, my brother went green and ran out of the cinema - true story that. Before the shark even munched its first victim my brother had legged it. I wasn't going to miss the movie and so I stayed in my seat and ended up with a heck of a telling off from my parents for leaving my younger brother to go home on his own. Now that's an amusing, though totally true, story but think of the anticipation for that movie, the effect on young minds, because all it took was a Duh Duh to set my brother off at Olympic speed. Either it was a particularly scary Duh Duh or my brother was a pussy! 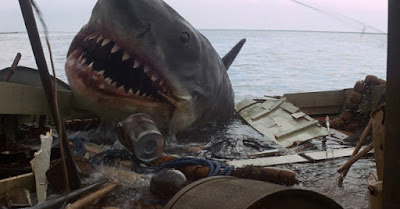 But I digress - watching the film now (a long time since I was 11 years old) does the film still work the same magic? Well, yes basically - it's still a damn good film and of course made Stephen Speilberg a superstar director for the geek generation. The performances are excellent - particularly Robert Shaw and Richard Dreyfuss. And although the shark effects may be ropey by modern standards the suspense works far better because of this.  Sure, these days we could have  a CGI shark that looked absolutely amazing but that would be no substitute for the skilled storytelling in this movie.

Some of the core scenes I know like the back of my hand, but as soon as I found myself sucked into the movie they worked just as well as they did the first time. Robert Shaw's death still brought a tear to me eye, and I still felt like punching the air when they blew up that bad old shark.

Check out that ever so scary Duh Duh below.