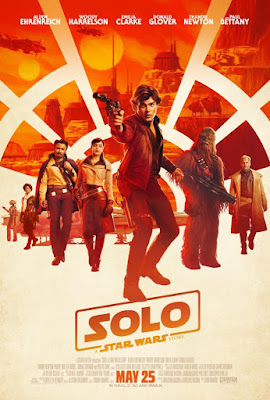 Reports are that the studio are panicking over the Han Solo movie, leaks reported on fan sites have said that the movie is a mess, and to be honest I've long lost interest in the Star Wars movies. I'm way too old for this shit -  I've not even seen the last one nor that Rouge One. But Star Wars remains a huge part of Pop Culture and so the Archive will continue to report on the franchise.

Disney have just released a new trailer for Solo.The trailer gives the best look at what the film is about. The trailer opens with Qi’Ra (played by Game of Thrones’ Emilia Clarke) asking Han Solo (Alden Ehrenreich) if he’s after revenge, money, or something else. Before long, Han is recruited for a job: telling Woody Harrelson’s Tobias Beckett, that he’s a driver and that he’s waited a long time for “a shot like this.” The film certainly has the feel of a heist story: we see Han, Qi’Ra and Tobias recruit a very suave Lando Calrissian (“Everything you’ve heard about me is true.”), while Beckett tells Han that once he joins, he’s part of this life forever. There’s also plenty of high flying action as the team trades shots with Imperial troopers and fend off TIE Fighters in the Millennium Falcon.

Posted by Gary Dobbs/Jack Martin at 03:18