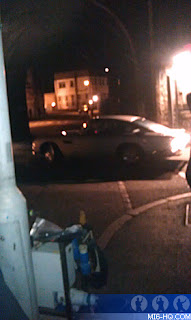 James Bond website MI6 are reporting sightings of Daniel Craig driving the Aston Martin DB5 on a recent night shoot in London - the website claims that the scene is similar to the one in Bond classic, Goldfinger where Connery drives the Aston Martin through the warehouses of Auric Enterprises:

“Shot at night, the scene is reminiscent of Goldfinger, with Bond driving the DB5 down narrow streets, zipping past warehouses and ducking under the arches of a railway line. For the 1964 film, the chase scene at Auric Enterprises was actually shot at Pinewood Studios. Filming will continue in Deptford and New Cross in London. In the movie, the DB5 action will feature in scene #134.”