Star Trek: The Wrath of Khan 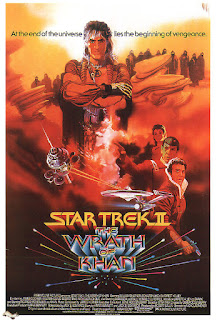 They say this is the best of all the Stark Trek movies, and although it's never been my favourite it was the first one I slipped into the DVD player from the handsome box set I received for Christmas - thank you very much. I've always liked Star Trek and of course I've seen all the movies, even the boring ones, and my favourite's always been The Search for Spock, with The Voyage Home coming a close second because it's fun and it's the Star Trek movie most easily enjoyed by non Star Trek fans.

Inspired by the "Space Seed" episode of the original TV series, Wrath of Khan  reunites newly promoted Admiral Kirk with his nemesis from the earlier episode--the genetically superior Khan (a sweaty and buff Ricardo Montalban)--who is now seeking revenge upon Kirk for having been imprisoned on a desolated planet. Their battle ensues over control of the Genesis device, a top-secret Starfleet project enabling entire planets to be transformed into life-supporting worlds, pioneered by the mother (Bibi Besch) of Kirk's estranged and now-adult son. While Mr. Spock mentors the young Vulcan Lt. Saavik (then-newcomer Kirstie Alley), Kirk must battle Khan to the bitter end, through a climactic starship chase and an unexpected crisis that will cost the life of Kirk's closest friend. 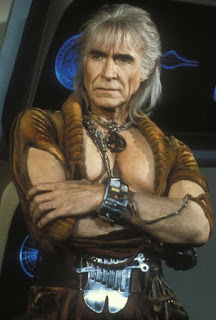 Wrath of Khan, to me, it's always felt small, more suited to a TV episode than the big screen, but of course in terms of story it holds up well and the acting is of a high quality. Maybe it's a fan fave because it uses the character of Khan first seen in the season one episode, The Space Seed - there is a goof here which was apparently explained in a Star Trek Novel - Khan says to Chekov, "Ahh, yes... Chekov, I remember". Although Chekov was not a bridge officer in the TV show that first featured Khan, it should be remembered that when Khan first took over Enterprise, he started with the engineering deck. Chekov was engineering ensign at the time, according to the movie's novelization.

Still away with all the geekery - This is a good, fast paced movie, full of action and surprisingly dark for a Stark Trek movie and of course the death of Spock at the climax is done with just the right amount of emotion. But a problem I have with Khan is that Kirk and Khan never actually meet face to face for the big show down at the climax, which really does feel like a let down, but this sentiment is not shared as Wrath of Khan is universally celebrated as the best of all the Trek movies.

"Of all the souls I've encountered in my travels, his was the most ... human" Kirk on the death of Spock.

Wrath of Khan is that it started off a story arc that would follow over the next two movies, and I enjoy the entire trilogy, though to my tastes Khan is still the weakest of the three - the next movie would feature some exciting scenes with the Klingons and the follow up would find the crew in modern day America trying to steal some Humpbacked Whales.

Wrath of Khan is a great movie with the original (and real) Star Trek crew, but I still don't think it's the best of all the Star Trek movies.

My wife and I consider it the best Star Trek ever, and in fact one of the best SF movies ever. Khan was so great in this one.

I always liked Khan best followed by The Search for Spock. I liked The Undiscovered Country quite a bit as well. Ah, hell, I like 'em all. :)