Let the right one in - book review 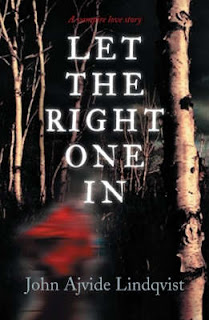 I’ve just finished this book, having already seen the two movie versions, the original Swedish and the Hollywood one, but until now the book had sat in my TBR pile waiting its turn. All I can say is I’m going to watch both movies again over the holidays because now that I’ve experienced the real thing I’ve got a hunger to revisit the characters and see just how faithful the movies were . I remember  they were both very good movies but this book is something else, and maybe the best thing I’ve read this year. I’ve been spoilt lately with good reading material coming to this straight off the back of Stephen King’s 11.22.63 and, you know what, I think John Ajvide Lindqvist is going to be as big as King.


I’m loathe to call it a vampire novel, but I guess that’s what it is – only the vampire between these covers is a truly original creation. The story resolves around Oskar, a 12 year old loner who is bullied at school and comes from a broken family, with both his well meaning parents being unable to improve his lot. Oskar keeps himself to himself, even hiding the fact that his urinates himself by making a foam ball, which he calls a piss ball, and putting it down his pants. And it is Oskar who provides the backbone to the book – a fully rounded character who creates empathy with the reader, so much so  that when his frustrations with the bullies from school prompt him  to murderous thoughts, stabbing a carving knife into a tree and pretending it is the lead bully, Johnny, we are truly captured by the story. Into his world comes Eli,a  strange girl of around the same  age as Oskar and a friendship builds up – she’s a whizz with the Rubik’s Cube, doesn’t wear any shoes on the coldest of winter nights and just might be a 200 year old vampire, frozen in an eternal childhood. Now if that all gives ideas of a Twilight comparison then banish it – this is the story that Twilight didn’t have the courage, nor the means to be.

The novel is set in a depressed working class suburb and populated by real working class problems – no on, it seems, is truly happy but they tolerate and accept their situations and make the best of a bad lot. There is a lot of humour, sadness and love among them  and these ancillary characters are just as well realised as the major characters, which is something that only the very best writers manage – “All these pathetic lonely people in a world without beauty.“ 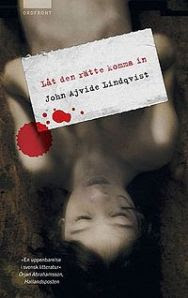 The title comes from accepted vampire lore where a vampire has to be invited into a room  to be able to enter, though a literal translation of the original Swedish would be Let Me In, and  many more aspects of vampire lore but there’s so much new mythology created in the story that it turns our head on what a vampire actually is. And there are so many layers to the story – we see Oskar, with Eli’s encouragement,learning to deal with the bully problem, even putting an end to it, we see an old man’s love for Eli and the path he is willing to take to be next to her/him/it. One of the most horrific character is Haken, a pedophile but it is to the authors credit that he manages to create several sequences where this character comes across as almost sympathetic – we are horrified by his actions, his thoughts and yet no cartoon character is he, no blacker than blacker than black monster in human skin, but a real person who lives on the page – he also ends up, after pouring acid over himself,  looking like the monster he is. There’ s an horrific scene that actually had this reader squirming – a monster with a hard on. But all this grim squalor is punctuated with scenes of genuine humour that comes from the characters. And there are moments when you almost cry for them and the plight they face.

In short it is a vampire novel but it’s a different kind of vampire novel that you’ve ever read,and it is these touches of true originality and realism, rare in the novel like this, that makes it so compelling. It is bleak, it is grim but it is also uplifting and even if there are no fairy tale endings for characters that have become very real during the reading it does show that the human spirit is a thing of great strength.
Excellent – a truly remarkable book that is destined for classic status. 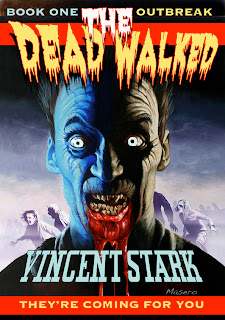 “But Stark has injected his own elements into the story. A pregnant woman and a plot thread I’ve not seen in a zombie story before. The ending threw a twist in and sets up the next part of the story, coming soon. Zombie stories are not a type I read a lot of, but I’ve come to expect good stuff from Stark/Dobbs/Martin, whatever genre he writes in.”  From the Amazon review by George R Johnson
Available now

Email ThisBlogThis!Share to TwitterShare to FacebookShare to Pinterest
Labels: john ajvide linqvist, let the right one in