Rock and Roll will never die.... 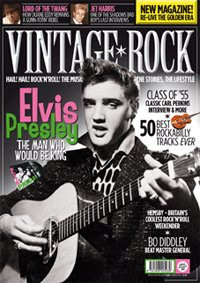 The music was already old when I was a kid, and now that I'm in my Forties I guess the music is positively ancient and yet it still won't go away. A new magazine which has just launched set out to explore the rich musical heritage of Rock and Roll, and prove it remains relevant today. The magazine certainly fills a gap in the market as there are magazines devoted to all styles of music, and yet classic rock and roll has been strangely neglected. Sure Mojo and Uncut often publish articles looking at the early days of rock and roll, but until now the UK magazine market hasn't had a mainstream  magazine dedicated to the golden eras of the 50's and 60's.

I do hope this magazine finds an audience - I enjoyed the first issue which I thought was excellent. The 50 best rockabilly tracks feature introduced me to some names I had never heard of. The Elvis feature was great as was the article on Hank Marvin and his Shadows.

Email ThisBlogThis!Share to TwitterShare to FacebookShare to Pinterest
Labels: rock and roll

Sounds good to one who was a kid in the 1950s, Gary! Looks good, too. I like the way they've picked up the look of the cover of the early RCA Elvis Presley album. Just the right shades of pink and green lettering on a black-and-white photo. Subtle, that.