Conan and the apes 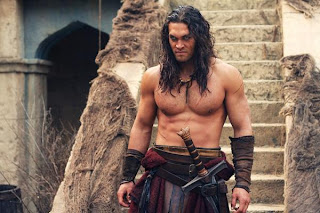 Been catching up on the summer movies now that the DVD screeners are doing the rounds - The new Conan was just awful, while Captain America was pretty good fun and Rise of the Planet of the Apes was bloody brilliant.

Why was Conan such a letdown? Well it was just battle after battle and some of these fights were so fast paced that it was difficult to see what was going on, who was besting who - not that it mattered since the film is just boring and there is no characterization of Conan other than just a beefcake with a sword. Such a shame because the world author, Robert E. Howard created for Conan deserved so much better than this.

Now Captain America on the other hand was a pretty good super-hero movie which was at least up to the standards of Iron Man and way better than either of the Hulk movies. It was a shrewd move to make the movie in period and give us the 1940 origins of the super soldier. The film could so easily have ended up ridiculous but instead Marvel have another triumph on their hands and the forthcoming Avengers movie which will team up the Marvel heroes we've seen in recent movies, is going to have a lot to live up to.

The real cracker of the bunch was Rise of the PLanet of the Apes - I'm a big fan of the original movie and wasn't expecting much from this one but WOW - this even wiped away the bad taste left by Tim Burton's naff remake. It presents a different origin to the ape rulers than we are used to, but if you think about it it doesn't contradict the events in the original Apes movie. Charlton Heston is still able to find the ruins of Lady Liberty and make the same conclusions, but maybe he was wrong. I'm not sure if the dates from the original movie tally up with Rise which is present day, but that's just too geeky.  And I'm certainly not going to look for continuity issues with the original ape sequels. 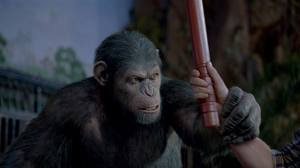 At the end of the day Rise is a great movie that adds to the Ape franchise, rather than sullie it.

The chimp, Ceaser who starts off the Ape revolution is an awesome creation and the biggest reason for the success of the movie. Created in the same way Gollum was brought to life in Lord of the Rings, and using the same actor Andy Serkis, the ape is an absolute triumph. Ceaser comes across as a real animal and we can really believe that he is a super intelligent ape, the result of his mother being injected with a new experimental drug. And by the end of the movie we are rooting for Ceaser and his ape army as they make moves to liberate themselves from the human masters. A sequel has been announced and on the strength of Rise it is something I'm very much looking forward to.
at December 07, 2011

Email ThisBlogThis!Share to TwitterShare to FacebookShare to Pinterest
Labels: movies, rise of the planet of the apes