The complete celluloid 007 - An all time high 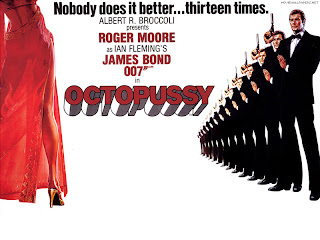 It used to be a tradition to get a Bond film on TV on Christmas night, but the Bond movies, now that they've gone all ultra modern and  thuggish, are hardly festive entertainment. However I wasn't much in the mood for the poor offerings on the idiot box and feeling bloated from too much food and booze, I felt like crashing on the sofa and watching a movie - I'd spent the evening watching the vintage sitcoms that BBC2 were offering up and this left me in the mood for some good harmless entertainment- I fancied a Bond movie but I didn't want anything too intense and my first thought was The Spy Who Loved me but I'd recently re-watched that one, and so I opted for Octopussy which is probably, along with A View to a Kill,   the Moore/Bond I've watched the least times over the years. 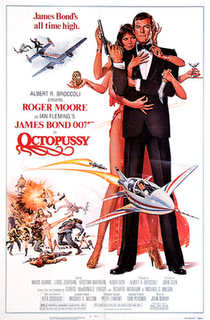 However I have, over the years , seen this movie maybe a dozen times and it's still watchable - it's good harmless fun, and refreshing that the violence level is as it should be for a Bond movie. Roger Moore may have been a little too old for the part when he made this entry in the series, but he still comes across head and shoulders above the current holder of the 007 status. There are so many classic moments - the pre-credits light aircraft disguised as an horse's arse is a cracking opening to a movie that knows it  offers absurdest entertainment and does it well. So well in fact that nobody does it better.

Roger Moore proved with this entry in the series that there was still life in the old dog and indeed his Bond movies were amongst the most successful ever made - time after time I have argued with people who have called Moore a terrible Bond  and I would maintain that Moore was closer than anyone else to Fleming's original creation. And for me Moore will always be the definitive James Bond.

I thought Timothy Dalton was excellent too, as was Pierce Brosnan and George Lazenby was OK if a little amateurish at times. Daniel Craig, I think, is a great and very talented actor but I just don't think he's right for James Bond and I feel that both his Bond movies were lacking the essential ingredients that make Bond stand out from all the other action movies out there. It would be interesting to find out how many of the people who think Craig's Bond is the Bond of the books have actually real Fleming's original novels.

Email ThisBlogThis!Share to TwitterShare to FacebookShare to Pinterest
Labels: the com, the complete celluloid oo7