Moneypenny back with James Bond

It now seems a certain thing that the role Naomie Harris would be taking a role in Bond 23, Skyfall, will be that of Moneypenny. Several newspapers have run with this story and it also seems that Q will return. If this turns out to be true that I applaud it - Daniel Craig's Bond has been missing far too many of the trappings of the franchise for my liking, and not only have fans had to contend with the changed character of 007 but also a vastly altered Flemingverse. And by the way the rumoured title of Red Sky at Night pisses all over the now official, Skyfall.

The producers may have finally realized that the formula Fleming invented is what made the series so popular in the first place. Bring back Moneypenny, Q and the humour, please! 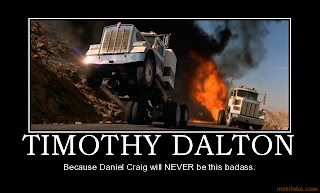 The plot of Skyfall will see Naomie playing a field operative who is taken off active duty to become the new Moneypenny.
at December 16, 2011